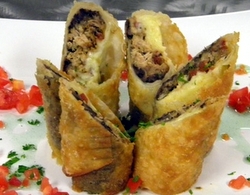 We tasted the Smoked Brisket Eggroll appetizer at the restaurant Abigael's on Broadway in Manhattan and knew that we just had to have the recipe – it is divine. Abigael's uses their own house–smoked brisket and serves it with BBQ Vinaigrette and Chipotle Potato Salad.  Chef Jeff Nathan was kind enough to share the recipe. They are so good!

In a large bowl place the brisket, sautéed onions and cilantro.  Lightly toss to evenly combine and set aside.

In a small bowl combine the barbecue sauce, apple cider vinegar, hot sauce and molasses. Using a whisk, combine these liquids. Add in all the dry spices and mix well.

Add the spice blend to the bowl of brisket and onions. Thoroughly combine all ingredients. Set aside.

Make the pepper medley:
In a large sauté pan heat the olive oil and sauté the onion and bell peppers over low flame.  Toss occasionally and cook until just wilted.  Set aside and keep warm.

To assemble:
Lay each eggroll wrapper flat.  Evenly fill the center of each wrapper with the brisket mixture.  Leave at least a 1/2-inch border around the edges of the wrapper.  Using a small pastry brush, moisten the top portion of the wrapper with water.

Starting at the bottom, fold the lower portion of the eggroll wrapper over the brisket filling.  Tuck in each of the sides.  Continue rolling up from the bottom.  Press to seal the moistened wrapper. Turn over to keep the seal at the bottom.

Heat soy oil in a large sauté pan.  Brown each of the eggrolls on all sides in the hot oil.  Once browned, transfer to a baking sheet and bake in a pre-heated 350˚ F. oven for 10 – 12 minutes until heated through.

Serve each Brisket Eggroll sliced in half, accompanied with the sautéed pepper medley and barbecue dipping sauce.