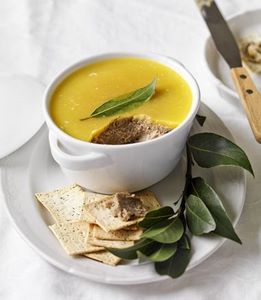 by Shaya Klechevsky, Chef & Owner, At Your Palate, LLC

Set your broiler on high and allow to preheat.

Kasher the liver according to the note below.

In a pot large enough, combine the sliced shallot, smashed garlic, bay leaves, thyme, water and salt. Bring to a boil, covered, reduce to a simmer, and allow to simmer for 3-5 minutes, to allow the flavors to infuse in the water.

Once the water solution has infused, put the kashered liver into the pot and allow to simmer for 1 minute. Remove from heat and allow to sit for an additional 3 minutes. This will allow the liver to absorb all those delicious flavors.

Remove bay leaves, and then drain all the cooking liquid from the pot. The livers, shallots, garlic and thyme should remain in the pot. With an immersion blender, coarsely blend all the

2 tablespoons at a time, add the Duck fat/Chicken fat/Earth Balance into the pot, while blending, allowing the fat to completely emulsify.

Once all the fat has been added, blend in the cognac or Brandy until a completely smooth consistency has formed.

Portion out finished paté into ramekins and cover with plastic wrap to touch the surface of the paté. Place in the refrigerator and allow to set for at least 4 hours, ideally overnight.

Once the paté has set and has thickened, you may melt some earth balance or duck fat and pour over the surface to act as a barrier, and place back in the refrigerator to harden. This will keep for about 2 weeks in the refrigerator.

*Note1: Kashering liver: Liver does not undergo a salting and soaking process of kashering like other organ meats and animal meats. Ideally, one should kasher liver over a grill, using a set of grills specifically for the use of kashering liver and for no other purpose. If a grill is not feasible, broil the liver using a roasting pan that's double-wrapped in aluminum foil (so that you may use it for other things) with a grill that can be placed inside the roasting pan suspended over the bottom so the impurities can drip down. The grill used inside the roasting pan should not be used for any other purpose other than for kashering liver. Once the broiler has preheated, place trimmed and washed livers in one layer over the grills and cook for 2-3 minutes or until the inside of the liver is no longer brown. You want a pink inside. Make sure not to overcook the liver, you just want to make sure that it's no longer raw. If worried, cook for less time and place under the broiler again for additional time until just cooked through. If grilling, grill on high heat for 2-3 minutes, to the same doneness.

*Note2: It's important to make sure to weigh your livers after you've trimmed, washed and drained them to make sure you have a full pound, otherwise, adjust the amount of fat as necessary. The proportion of Liver to Added fat is 1 pound:12-ounces. If you have less than a full pound of livers, either use slightly less fat or add enough liver to come to about a pound.