We are available 24/7 by fax, e-mail or by phone. You can also use our quick contact form to ask a question about our products.

First Cut Brisket - Why is it Dry?

Q: I only buy first cut brisket but find that it's so lean that it doesn't get soft enough and it's sometimes dry. I cook a 3-4 pound piece for 3 hours on 325.  Any suggestions?? Gerri Zabusky

A: Gerri, my question to you would be why do you only buy first cut brisket?  Do you like spending extra money or losing that juicy, savory flavor that brisket brings to the table. I suggest that most people buy first cut because they have been told it is better and by better they mean leaner. That's definitely true.  No matter what you call it, flat cut, point, first cut brisket is definitely larger (weighs in at 5-7 pounds) and decidedly leaner, and that's why it can dry out when cooking.  If you only want to buy that cut, then be sure you keep it swimming in liquid and check it more frequently.  There is a fine line between fall-apart yummy and over cooked. For my money, 2nd cut brisket delivers the flavor, controls the cost and you can still monitor the fat...here's how. 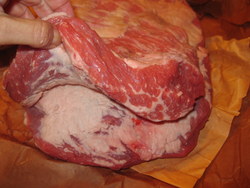 Have your butcher cut you a 2nd cut brisket, that's the one with the flap of fat that sits atop the lean flat cut.  The top traditionally has been called a deckle- think of it as a double decker.

Season the meat with kosher salt and black pepper. I then smear a layer of Worcestershire sauce to help add color and flavor and it allows the seasonings to adhere to the meat. This is the perfect time to rip open a packet of Lipton Onion Soup, it has all the seasonings that a brisket craves. 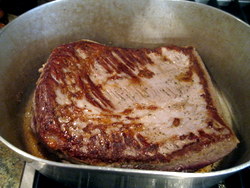 Heat a few tablespoons of olive or canola oil in a braising pot or Dutch oven (I still have the first one my grandmother bought me when I got married, nearly 36 years ago). Brown the meat over a medium heat in the pot to get a nice brown crust on the outside.  Remember, color equals flavor, so the crust brings lots of savory umami to the dish. To the pot add onions, baby carrots, even parsnips or turnips if you like and a couple of cups of beef stock.  You don't want to cover the meat, the top third should peak through.  I cook the brisket on the stovetop over low heat for about 1 1/2 hours.  I then add to the pot, lots of quartered baby Dutch or Yukon gold potatoes.  They not only taste great as they absorb some of the sauce, but their starch serves as a natural thickener.  Cook the brisket another 1 1/2 hours or until it is fork tender.

Now, here's where we get rid of the fat from the top layer. Cut that piece right off the top.  I don't mind the fat, so I nibble on it, but if you prefer, you can shred it and make a fabulous ragout.  Take the brisket and place it in a sealed container, transfer the veggies to a bowl and cover tightly and then let the gravy sit overnight in the fridge.  Voila, the fat will form a thick layer on top of the delicious au jus and you can easily remove it.  What you are left with is the first cut brisket, which is now juicy and moist, an amazing flavorful gravy and no added fat. Slice the cold brisket against the grain and reheat in the defatted gravy.  Toss the veggies back into the fun and serve.