Hummus with Preserved Lemon and Cumin 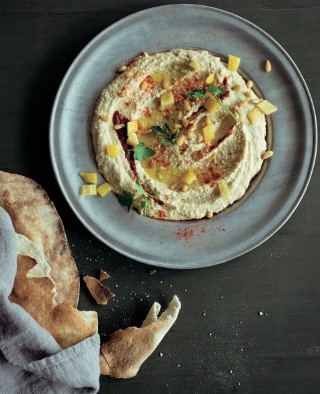 Hummus with Preserved Lemon and Cumin
Excerpted from KING SOLOMON’S TABLE by Joan Nathan. Copyright © 2017 by Random House. Excerpted by permission of Alfred A. Knopf, a division of Random House LLC. All rights reserved. No part of this excerpt may be reproduced or reprinted without permission in writing from the publisher.

At mealtime, Boaz said to her [Ruth], “Come over here and partake of the meal, and dip your morsel in the vinegar.” Ruth 2:14

If using canned chickpeas, skip the following step.
Put the dried chickpeas in a large bowl with cold water to cover and soak overnight. The next day, drain and rinse them, then put them with the baking soda in a large heavy pot with enough cold water to cover by about 3 inches. Bring to a boil, skimming off the scum that accumulates. Simmer, partially covered, for 1 to 1 ½ hours, or until the chickpeas are soft and the skin begins to separate, adding more water if needed.

Heat a frying pan and add 1 tablespoon of the olive oil. Spread the pine nuts in the pan and stir-fry, browning on all sides.

To serve, transfer the hummus to a large, flat plate, and, with the back of a spoon, make a slight depression in the center. Drizzle the remaining olive oil and sprinkle pine nuts, paprika or sumac, and parsley or cilantro over the surface.
Serve with cut-up raw vegetables or warm pita cut into wedges.

Note: Leftover hummus tends to thicken; just add some water to make it the right consistency. After a few days, freeze any uneaten hummus. Otherwise, with no preservatives, the dip will spoil. Baking soda just helps the chickpeas cook faster and breaks them down. And remember to add a little cumin, which is said to prevent gas.
Yield: about 4 cups, or 6-8 servings

Step 1: Cut off the very ends of 8 of the lemons. Slice each one lengthwise into quarters, cutting to but not through the opposite end. Gently open half the lemon over a bowl and sprinkle a tablespoon of salt into it then open the other half and add another tablespoon of salt – using 2 tablespoons salt per lemon.

Put the lemons in a large jar (it’s fine if you have to pack them in, as they will shrink). Extract the juice from the remainder of the lemons and completely cover the cut ones in the jar with juice. Slip in the bay leaves Let sit for a day lightly covered with a towel.

Step 2: The next day, pour a thin film of olive oil over the lemons. This will help keep them sealed while they preserve. Cover jar tightly and put the jar in the refrigerator allowing to cure for 2-3 weeks. They will last for at least a year.

Favism—Why Israelis Make Hummus and Falafel Out of Chickpeas
When Chaim Sheba, an Austrian-born geneticist, came to Israel, he noticed that some soldiers of Mediterranean origins came down with a blood disorder after eating fava beans or even, in some cases, after walking in a field with the fava beans in the springtime and smelling their pollen. This hereditary disorder, which causes people to have abdominal pains and vomiting, resulting from the rapid break- down of red blood cells, was discovered in 450 b.c.e. by Pythagoras, who warned about this favism, the dangers of eating fava beans for some people. Today, thanks to Dr. Sheba and others, we know more about this enzymatic disease. For that reason, Israeli cooks decided to put only chickpeas in their falafel and hummus.

The use of the word “vinegar” may be misleading in the above mention of hummus, from the book of Ruth, written almost three thousand years ago. Most translations interpret the word chamootz to mean “vinegar” (as it does in contemporary Hebrew). However, according to the Israeli author Meir Shalev, the Hebrew letters chet, mem, and zadek are the root letters of both the words chamootz and chimtza, which in biblical Hebrew means “chickpeas.”

“In biblical Hebrew, there were no vowels, so words were more confusing,” Meir told me, and added, “Anyway, if Boaz served his workers pita dipped in vinegar instead of something more substantial like hummus, they wouldn’t have been very happy.”

Hummus, meaning “chickpea” as well as “chickpea dip” in Arabic and modern Hebrew, is one of the oldest and most beloved dishes known to mankind. Originating in Mesopotamia, it is essential to the cuisine of the Middle East, served for breakfast, lunch, and dinner there for thousands of years. People never seem to tire of eating and discussing this ancient protein-rich paste.

Today, cooks soak and prepare dried chickpeas, often standing over large iron pots for hours until the beans fully soften. Early on, they learned to grind sesame seeds, which came from China to Mesopotamia, into a thick paste called tahina, which was stirred into the softened beans with some olive oil, garlic, a little salt, and pepper. This simple, sacred mix provided poor people their protein for the day, and the arrival of lemons from China added a dash of flavor that perfected this comfort dish of the Fertile Crescent.

In the 1960s, when Americans were traveling throughout the Middle East, they often came back with the taste of garlicky hummus on their breath. And with the advent of the food processor in the early 1970s, it was easy to prepare. In those days, you could only get hummus in mom-and-pop Middle Eastern stores in neighborhoods catering to immigrants, such as Sahadi’s in Brooklyn. Today, every grocery store has dozens of varieties.

Because I met my husband in Jerusalem, we requested hummus at our wedding in 1974 and had to give the caterer a recipe for the dip. One guest who had never tasted this before told me my recipe, with its hint of that exotic spice cumin, was so good I could sell it to Zabar’s. I didn’t heed the call but others did, and now hummus is marketed around the world. Even with all the brands sold today—and some are very good—I prefer to make my own. Try it for yourself; you will see how good it tastes, especially with the preserved lemon and the cumin.