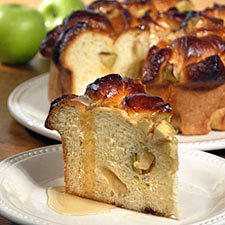 This challah is totally different from the braid or spiral of the golden bread you're used to. Stuffed with sweetened, cinnamon–scented apple chunks, it's prepared like monkey bread. Though the process is messy, the result is well worth it! Read our blog about this challah, with additional photos, at Bakers' Banter.

To make the dough: Combine all of the dough ingredients and mix and knead them, by hand, mixer, or bread machine, until you have a soft, smooth dough.

Allow the dough to rise, covered, for 2 hours, or until it's puffy and nearly doubled in bulk. If you've made the dough in a bread machine, allow it to rise in the machine for an extra hour after the dough cycle is completed.

Toss the apple chunks with the sugar and cinnamon.

Gently deflate the dough, transfer it to a lightly greased work surface, and flatten it into a rough rectangle, about 8 x 10–inches.

Spread half the apple chunks in the center of the dough.

Fold a short edge of the dough over the apple to cover it, patting firmly to seal the apples and spread the dough a bit.

Spread the remaining apple atop the folded-over dough.

Cover the apples with the other side of the dough, again patting firmly. Basically, you've folded the dough like a letter, enclosing the apples inside.

Take a bench knife or a knife, or even a pair of scissors, and cut the apple-filled dough into 16 pieces. Cut in half, then each half in halves, etc. This will be very, VERY messy; the dough is slippery, apples will fall our, sugar syrup will ooze... it's not pretty. Don't worry, and don't stress about making all the pieces the same size.

Lay the dough chunks into the pan; crowd them so that they all fit in a single layer (barely). Lots of apple chunks will fall out during this process; just tuck them in among the dough pieces, or simply spread them on top.

Cover the challah gently with lightly greased plastic wrap or a proof cover, and allow it to rise for about 1 hour, until it's a generous 2" high. It should just crest the rim of a 9" round cake pan. Towards the end of the rising time, preheat the oven to 325°F. 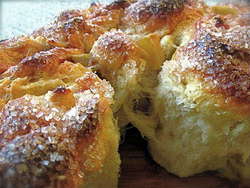 Whisk together the egg and 1 tablespoon water. Brush the dough with the egg mixture, and sprinkle heavily with the coarse sugar, if desired. If you're going to drizzle with honey before serving, omit the sugar.

Place the bread in the lower third of the oven. Bake it for 55 minutes, or until the top is at least light brown all over, with no white spots. Some of the higher-rising pieces will actually char; that's OK.

Remove the challah from the oven, and after 5 minutes loosen the edges and carefully transfer it to a rack.

Serve the bread hot, warm, or at room temperature. Drizzle with honey just before serving, if desired; or serve with honey for dipping.

Yield: One 9" round challah, about 16 servings

Tips from our bakers