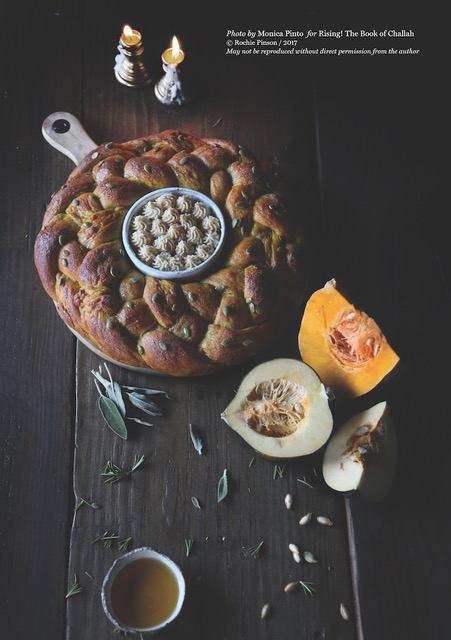 In a large bowl, pour the very warm water. Add the sugar and then the yeast.
Allow a few minutes for the yeast to bloom.
Add the first part of the flour, the salt, cinnamon, nutmeg, ground cloves, and pumpkin spice mix, and mix until a smooth batter forms.
Add the eggs, oil, vanilla, and pumpkin purée and stir again until smooth.
Gradually add the remaining flour, mixing with your hands or stand-mixer until the flour has fully incorporated into the dough. Be sure to add only as much flour as is needed to form a non-sticky workable dough.
Knead the dough for about 10 minutes or until it springs back when lightly touched.

Pour 3–4 teaspoons of oil into the bowl.
Turn the ball of dough around in the oil until the outer layer of the dough has been thinly coated.
Cover the bowl with plastic wrap or a warm, damp dishcloth and place in a warm spot to rise.
Allow the dough to rise for 1 1/2 to 2 hours, until dough has doubled in bulk. Punch out some air and allow to rise for an additional hour.
Preheat the oven to 350°F.

Braid or shape the dough as desired and place on lined baking sheets. If using the “half recipe” to create a wreath, use most of the dough for the wreath, saving a small amount for extra rolls or small challahs. Brush the challah with the egg glaze after braiding
Allow the challahs to rise for an additional 30 minutes.Glaze challahs again and sprinkle with toppings.
Bake at 350°F for 30 minutes (medium-sized challah; time will vary according to challah size). The challah is ready when its underside is brown and it sounds hollow when tapped.

To achieve the look of the cinnamon butter in the photo
Fill the bowl 2/3 way full with the spread.
Put the rest of the spread into a cake decorating bag fitted with the star tip.
Working from the center outwards, create stars, one at a time, working in a circular pattern until the entire surface of the bowl’s interior has been filled.
Keep the spread refrigerated until ready to use so that it doesn’t melt and lose its shape.