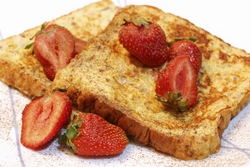 What a great way to make French Toast – with ice cream!

Beat ice cream, eggs, water and cinnamon until well blended; dip bread in batter; then fry in buttered skillet over medium heat until toast is golden brown on both sides.

NOTE: Some people like a custard-type of French toast while some like it more "eggy" like an omelet on top of bread. If you like the custard style, use soft white bread and only dip the bread in the batter for about five seconds on each side; otherwise, submerge it for the same amount of time and the bread will absorb a lot of liquid making the inside of the bread soft after cooking. For a heartier French toast use a heartier bread and dip the bread in the egg mixture for 10 seconds, or more, depending on how fresh and how dense the bread is.