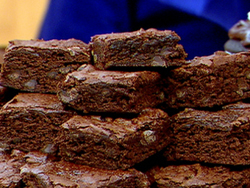 Benjamin and I made this recipe on CBS's The Early Show. As soon as the show was over and the platter of brownies was moved off the set to the studio's prep kitchen, many of the show's staff charged in for the brownie they had been craving all morning! I love this recipe because by adjusting the baking time, you can easily "customize" the brownies' consistency from gooey to chewy to cakey.

Sift the flour, cocoa powder, baking soda, and salt into a bowl. Set aside.

Combine the sugar, oil, nondairy sour cream, applesauce, corn syrup, vanilla, and vinegar in a mixing bowl and, using an electric mixer, beat on medium speed until very smooth.  Be sure to scrape down the sides of the bowl so all the ingredients are well incorporated.

Add the dry ingredients tot he wet ingredients and beat on medium speed. Once again, be sure to scrape down the sides of the bowl with a spatula.

Fold in the chocolate chips, reserving 1/4 cup to sprinkle on top once the brownies are baking, then mix on low speed until the chips are evenly distributed throughout the batter.

Pour the batter into the prepared pan. Use a spatula to distribute evenly.

Bake the brownies in the preheated oven for 40 to 50 minutes.

After the brownies have been baking for approximately 15 minutes, sprinkle the reserved 1/4-cup of chips evenly over the top of the brownies and resume baking.

Cool the brownies in the pan for at least 30 minutes before serving.

*Variation:  For chocolate-mint brownies, substitute 1 1/2 cups of broken up bits of Divvies Benjamin Crunch Bars for the chocolate chips.

Watch Lori and Benjamin on CBS's The Early Show – they are making the above Brownie recipe.