Cheesecakes Around The World

The Dessert That Knows No Boundaries 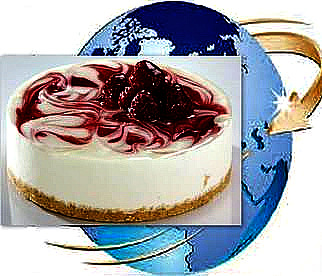 No, cheesecake was not created in New York even though the New York style cheesecake variety is what usually comes to mind when one thinks of cheesecake. As the old saying goes "all roads lead to Rome", and that is where the Romans took their adaptation of cheesecake when they conquered the ancient Greeks. All of the cheesecake credit goes to the Greeks who knew a good thing and considered it a cake – the earliest attested mention of a cheesecake is by the Greek physician Aegimus, who wrote a book on the art of making cheesecakes.

Of course, the modern version of cheesecake does not resemble what the ancient Greeks and Romans prepared. That credit goes to James Kraft, who in 1912 developed a form of pasteurized cream cheese and trademarked the Philadelphia Cream Cheese brand in 1928, which is now the most commonly used cheese in cheesecake recipes.

Cheesecake knows no language barrier or ethnicity. It is the dessert heard around the world. Each county has its own "signature" ingredient that makes the cheesecake distinctly their own. Here are a few examples of Cheesecakes Around the World:

Greece
This is where it started! The Greeks use myzithra cheese for their cheesecake recipes. It is similar to farmer's cheese and ricotta cheese and has a pungent aroma and mild taste. This recipe for Myzithra Cheesecake is crustless and is loaded with yummy ingredients: raisins soaked in brandy, crushed almonds, lemon zest and sprinkled with cinnamon and sugar. Ricotta or mascarpone cheese can be substituted for the myzithra.

France
French cheesecakes are not very high (1-2-inches) and are made from Neufchatel cheese, which accounts for their light texture and flavor. In 1872, William Lawrence, a New York dairyman of the township of Chester, created the first American cream cheese as the result of an attempt to create a batch of Neufchâtel. Try this recipe for Tarte au Fromage Blanc - it has a shortbead crust, is baked in a tart pan and is not very sweet.

,shares his Ricotta Cheesecake, which is a classic, and Alessandra's Strawberry & Prosecco Tiramisu, uses mascarpone cheese, although not a cheesecake is too good to not include!

Brazil & Argentina
The cheesecake recipes from these two South American countries are characterized by a layer of marmalade on top – guava marmalade in Brazil and strawberry or another berry marmalade  in Argentina. Enjoy this cheesecake version that swirls the strawberry jam through the filling, Strawberry Swirl Cheesecake.

United Kingdom
The cheesecakes of the United Kingdom and Ireland are similar to those of the United States in that they typically use cream cheese and sugar in the filling, plus the addition of cream. Their recipe for the crust differs from ours –  it is made from a combination of crushed, buttered British biscuits. Toppings include fruit compote and lemon curd, and fruit jelly may also be mixed in with the filling to keep it firm. We have selected this Caramel-Apple Cheesecake as an example of the extravagant topping the British like –  this recipe uses a graham cracker crust though

New York, USA
There are so many regional cheesecake recipes in the United States but the king of cheesecake recipes is the unadorned New York Style cheesecake. Rich, dense, smooth, creamy and full of cream cheese, heavy cream, sour cream, eggs, sugar – a real killer! And of course, just like kugel recipes, there are a ton of recipes for New York Style cheesecake and each baker will claim that their recipe is the best. We consider the recipe for Lindy's Original Cheesecake as #1!

Cheesecake can be served topped with fruit, chocolate ganache, marbled with chocolate, swirled with raspberries or crumbled Oreo cookies; it can be made flavored; it can be smothered with berry sauces, served with whipped cream or it can be left in its natural state and served unadorned. Either way, it is a global dessert favorite and a dessert of choice for the holiday of Shavuot.

Now all that you need to become a Cheecake Whiz are some great cheesecake tips and we are sharing some to insure that your cheesecake baking venture is a success – KosherEye Be a Cheesecake Whiz Tips.