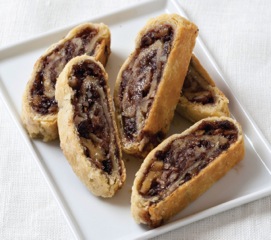 As the name implies, this rugelach has everything in it. You can add more of the ingredients you like and less of those you don't like. I got the idea for the filling from Sandy Bobb, who showed me her family's revered strudel recipe, which has so many different ingredients in the filling. I guessed correctly that the filling would work for rugelach as well.

To make the dough
IN THE BOWL of a mixer fitted with a paddle or a food processor fitted with a metal blade, mix the margarine, cream cheese, flour, confectioners' sugar. and vanilla until the dough just comes
together. Divide the dough in half, wrap each piece in plastic wrap, and flatten. Freeze overnight. Let the dough thaw until you can press it in a little.

To assemble the rugelach
PREHEAT OVEN to 350°F (180°C). To roll out the dough, place a 10 x 15-inch (25 x 38-cm) sheet of parchment paper on the counter. Sprinkle it with flour and place one disc of dough on the parchment, sprinkle with more flour and then cover with a second sheet of parchment. With a rolling pin, roll over the parchment until the dough is 10 x 13 to 15 inches (25 x 33 to 38 cm). Peel back the top parchment a few times while rolling and sprinkle some more flour on the dough. Remove the top parchment and reserve it to cover the second disc of dough.

In a small bowl, combine the raspberry and apricot jams. Use a silicone spatula to spread half of the jam mixture over the dough.

In another small bowl , combine the sugar and cinnamon. Sprinkle half of the cinnamon-sugar over the jam on the dough. Then sprinkle half of all the remaining ingredients on top. Fold the short sides of the dough 1 inch (2.5cm) in toward the center to keep the filling inside. Using the parchment to help you, roll up the long side, working slowly and rolling as tightly as you can. Make sure the seam ends up on the bottom. Slide the roll and parchment onto a cookie sheet. Repeat with the second piece of dough and place on the parchment a few inches away from the first roll.

BAKE the rolls of dough for 40 to 45 minutes, or until the tops begin to brown. Let them cool and then slice the rolls into one-inch pieces. You can freeze the slices or the rolls, slicing them when you're ready to serve.

Store covered with plastic or in an airtight container at room temperature for up to five days or freeze for up to three months.