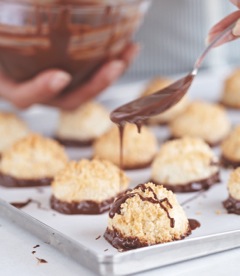 The connection between the coconut, a tropical fruit, and Ashkenazic cooking in Slavic Central and Eastern Europe is elusive. What little is known is that sweets using coconut were featured in an English-Jewish cookbook in 1846 and that a recipe for the coconut macaroon is given in Mrs. Esther Levy's Jewish Cookery Book (also known as The First Jewish-American Cookbook), published in Philadelphia in 1871. Shredded coconut and coconut oil were in use in Ashkenazic baking in the mid-nineteenth century, and coconut replaced more traditional almonds in Passover macaroon recipes during this time. How exactly the coconut migrated north in the first place remains mysterious, though speculation centers on Italian Jews as the link. Regardless of origin, coconut macaroons, including chocolate-dipped varieties such as these, have become an easy-to-make Jewish deli dessert classic.

Preheat the oven to 350°F. Line a baking sheet with a silicone baking mat or parchment paper.

In a large bowl, combine the sugar, coconut, egg whites, vanilla, and salt. Mix well, preferably using your hands, until all of the shredded coconut is moistened by the egg whites.

Form 2 lightly packed heaping tablespoons of the mixture into a haystack shape on the lined baking sheet or, to make the task quicker and easier, take a single scoop of the mixture with a #30 ice-cream scoop (available at most kitchen and restaurant supply stores). Use the backs of your fingers to gently pat and tighten the base of the haystacks and make an even, crack-free dome on the tops. Repeat with the remaining coconut mixture, placing the macaroons at least ½ inch apart.

Bake until golden brown, about 20 minutes. Transfer the baking sheet to a cooling rack and allow the cookies to cool to room temperature. If you try to remove them before they are cooled, the bottom may stick, leaving part of the cookie on the sheet.

After the macaroons are cooled, mix together the chocolate chips and vegetable oil in a small microwave safe bowl. Slowly melt the chocolate in the microwave on low power, stirring about every 30 seconds, until the chips are just melted, about 2 minutes.