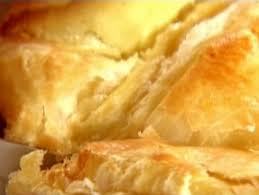 Cheese Danish were so popular that they were always first to be sold out in the bakery. Eventually I instituted a system allowing us to have freshly baked cheese Danish on hand at all times.

I prepared extra pans of pastries that were kept unbaked and frozen. One or two thawed pans were always kept in the refrigerator, retarding the rising and allowing us to have fresh, hot-from-the-oven Danish with about a 1-hour lead time—the time required to allow the dough to rise and be baked. Pans that remained unused in the refrigerator were perfect for the first baking early on the following morning. A similar system can be adapted in the home by the astute baker who wishes to maintain a reserve of fresh baked goods.

In the mixing bowl of a stand mixer fitted with a paddle, sprinkle the yeast over the warm water to soften. Add the milk, eggs, sugar, 6 tablespoons softened butter, milk powder, all-purpose flour, cake flour, salt, and orange zest and juice. Mix at slow speed, pulsing with the on/off switch so that the flour does not fly out of the bowl. When the flour is fully incorporated, stop and scrape all of the ingre¬dients clinging to the bottom and sides using a plastic scraper or rubber spatula.

Mix for 10 to 15 minutes at slow speed. After 10 minutes, if the dough has not come away from the sides of the bowl, use medium speed for a few minutes, adding more flour, 1⁄4 cup at a time, if necessary. It is important to keep the dough soft. Don’t add flour unnecessarily. Remove and scrape down the paddle, cover the bowl with a cloth or plastic wrap, and let the dough rise until doubled in volume, 45 to 60 minutes.

Punch down and turn out onto the pre¬pared baking sheet. Cover loosely with a floured cloth or plastic wrap and refrigerate for 30 to 45 minutes, or until chilled.

ROLL-IN
Before removing the dough from the refrigera¬tor, allow the remaining 2 cups of roll-in butter to soften slightly and then cut it into 1-inch cubes. Put the butter in the mixing bowl of a stand mixer fitted with the flat paddle. Pulse the butter with the on/off switch to break up the cubes. Work fast: the butter should remain cool. Remove the butter from the mixer. The butter should remain cool to the touch. Don’t worry if some lumps remain. They will blend in when the dough is rolled. The goal is to try to have the roll-in and the dough at the same rolling consistency. If necessary, refrigerate the roll-in to achieve rolling consistency.

On a floured work surface, roll out the Danish dough into a 1-inch-thick rectangle measuring 24 inches long by 12 inches wide. First roll the length gently from the center outward to the edge, dusting with sufficient flour to keep the dough from adhering to the rolling pin. Then roll the width. Try not to tear the dough, but if you do, pressing in a little piece of dough can repair holes. Use the dusting flour generously. If the dough sticks to the work surface, flip half the dough over on itself. Scrape the work surface clean wherever the dough has adhered, dust well with more flour, and flip it back. Repeat with the other half. Brush off excess flour from the top of the dough.

To roll-in, dot the butter over two-thirds of the dough, leaving a 1-inch border so that the butter does not ooze out while rolling. As if folding a letter in thirds, fold the non but¬tered third over the center. The goal is to form alternate layers of butter and dough. Brush off the flour and then fold over once more.

FIRST ROLL: THREE-FOLD
Turn the dough a quarter turn so that the seam is facing you, and dust with flour, top and bottom. Roll the dough along the length to about 24 inches and then roll to about 18 inches wide (about the length of your baking sheet).
After brushing off excess flour, fold in thirds. Gently lift or flip over onto the well-floured baking sheet. Make an indentation in one corner of the dough with your finger. This signifies that the dough has received one roll. Cover with a cloth or plastic wrap and allow to rest in the refrigerator for 30 to 45 minutes.

SECOND ROLL: THREE-FOLD
Repeat as in the first roll, above. Make two indentations and refrigerate. The indentations mark the number of rolls.

THIRD ROLL: FOUR-FOLD
Roll out as for the first two rolls, but this time roll the dough longer and thinner, to about 32 by 18 inches. Brush off the flour. Fold the short ends in to meet at the center. Brush off excess flour and then flip one end over the other (like closing a book), producing a four-fold.
Place the dough on the well-floured baking sheet. Gently roll and press the top down with the rolling pin so that the dough fills the pan evenly. Brush off any excess flour from the top and brush with vegetable oil to prevent a crust from forming. Mark with three indentations with your finger tip in the corner of the dough. Cover with a cloth or plastic wrap so that the top does not dry out and place on the lowest shelf of your refrigerator. Refrigerate overnight on the baking sheet until properly aged and well chilled. Cut the dough in quarters, wrapping each section tightly with plastic. Sections can be frozen and thawed in the refrigerator as needed.
Yield: About 6 pounds of dough

Baker’s Secret: Before the final flip of the four-fold, sprinkle one side of the dough with cinnamon sugar. This will add extra flavor to the pastry when baked. It also makes it easier for the baker to reopen the final fold later to add fillings.
Baker’s Secret: Freeze the dough for 30 minutes before refrigerating to slow down the initial rise. Bear in mind that even while frozen, in a home freezer, the dough will continue to age slowly and will lose some strength and consequently some flavor. Remember: never refreeze dough. Thaw frozen dough over-night in the refrigerator.

Danish Glaze:
Immediately upon removing from the oven, any yeast-raised pastry that has been baked with egg wash painted on, should be brushed with a Danish glaze, also known as Danish syrup or Danish wash. This creates an exceptionally high gloss for a professional finish.

Cheese Filling:
Customers in the bakery often wanted to know the secret in our cheese Danish and coffee cakes. Here is the recipe: make sure to use fresh cheese and a heavy hand.

In a stand mixer fitted with a paddle or with a hand-held electric beater, mix the butter with the sugar until blended; do not cream. Add the cheese; mix lightly. Add the egg yolk, flour, salt, and pineapple. Mix at slow speed until blended. With a large rubber spatula, scrape the beaters and the sides and bottom of the bowl, bringing the ingredients up to the top. Mix to blend.
Yield: About 3 cups (22.5 ounces)

Pot cheese or farmer cheese will produce a smooth, dry filling, but if unavailable, substitute dry-curd cottage cheese. Drain excess liquid from the cottage cheese by placing it in a double layer of cheesecloth and twisting to squeeze out as much liquid as possible.
In the bakery, I used a specially formulated baker’s cheese that is processed with rennet to make it dry. You might try to cajole your friendly neighborhood baker into selling you some.
The pineapple, if used, disappears into the cheese and adds to the flavor. This recipe can be doubled and kept for a week or more. It can be frozen for 3 to 4 weeks, but there will be some change in taste.