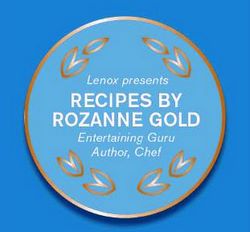 By Chef and Cookbook Author, Rozanne Gold, for Lenox China

In this unorthodox procedure, the fish is oven-steamed in a large packet, then vinaigrette is poured into the packet so that the fish marinates overnight. Served in smaller portions, it’s a terrific alternative to gefilte fish for the beginning of a Passover Seder dinner. Otherwise, it is a lovely chilled fish dish to serve in warmer weather.

Preheat the oven to 450 degrees. Line a rimmed baking sheet with foil twice as long as the sheet. Remove fronds from fennel and set aside for later. Slice the fennel paper-thin and scatter in the center. Scatter the lemon slices over the fennel. Season fish with salt and pepper and place on top. Scatter the tomatoes and carrots on and around fish. Drizzle with 3 tablespoons oil and top with 16 thyme sprigs. Fold over the overhanging foil and crimp the edges to make a tight packet. Bake 22 minutes, until the fish is just firm.

Meanwhile, make sauce: Using a small, sharp knife, remove the rind and all pits from small lemon. Cut into small pieces. Place in a blender with garlic, and ¾ cup olive oil. Process until smooth and emulsified. Add salt and pepper to taste. When fish is cooked, open foil packet and pour the dressing over fish. Close packet tightly. Let cool. Refrigerate overnight or until very cold, 6 hours or overnight.

Cut fish into 8 portions. Using a spatula, scoop up fennel and tomatoes and arrange in center of 8 large plates. Spoon 1 tablespoon of remaining sauce over fish. Finely chop fennel fronds and scatter on top.