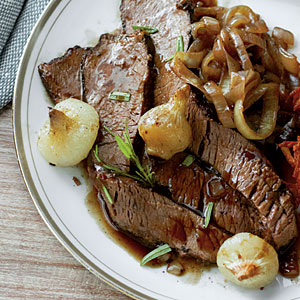 This classic recipe and its variations are from Norene's Healthy Kitchen by Norene Gilletz (Whitecap Books).

Enjoy my scrumptious recipe for Cranberry Brisket with Caramelized Onions
This dish is excellent for a large crowd, making it perfect for any of the major Jewish holidays. Be sure to check out the variations and chefs' tips. This brisket is tender and tasty—it's sure to become a family favorite. Roast brisket, veal or other meats will freeze very well, but if you don't want to freeze them, you can make them a few days ahead and keep them tightly covered in the refrigerator.

Spray a large roasting pan with cooking spray. Spread the onions in the bottom of the pan and place the brisket on top. Season both sides of the brisket with garlic, salt, and pepper. In a small bowl, combine the cranberry sauce and tomato sauce. Mix well; spread over the brisket. Pour the water around and underneath the brisket and cover the pan tightly with foil. (If desired, marinate for an hour at room temperature or up to 48 hours in the refrigerator.)
Preheat the oven to 325 F degrees. Cook the brisket, covered, about 4 hours or until the meat is fork-tender and the onions are caramelized. (Calculate 45 minutes per pound as your cooking time.) For the last hour of cooking, slightly loosen the foil and baste the meat occasionally.
When done, remove the pan from the oven and cool completely. Cover the pan and refrigerate over night. Remove the congealed fat from the surface. Slice the brisket thinly across the grain, trimming away the fat. Reheat the slices in the pan gravy for 25 to 30 minutes in a covered casserole at 350 degrees F.

Approximately 12 servings. Keeps for up to 3 to 4 days in the refrigerator; reheats well. Freezes well for up to 4 months.

Variation: Cranberry Veal Brisket
Instead of beef, use a veal brisket. Cooking time will be the same. If desired, have the butcher cut a pocket in the roast; insert your favorite stuffing into the pocket and increase the cooking time by 1/2 hour. (Do not freeze the stuffed roast.)

Variations
Replace the onions with 1 package of dried onion soup mix and omit the salt. Rub the soup mix, garlic, and pepper evenly over the brisket.
Instead of water, use dry red wine, diet ginger ale, or cola.
Barbecue or chili sauce can be used instead of tomato sauce.

Chef's Secrets
Flat or Fat? Beef brisket is divided into two sections. The flat cut has less fat and is usually more expensive than the point, which is much fattier and also more flavorful. A double brisket has a thick layer of fat between the two sections.

Ask your butcher to trim the brisket well. Cook it a day in advance so you can remove the congealed fat before slicing and reheating.

Double Brisket? Don't double the time! If your brisket is very large (8 to 10 lb.), cut it crosswise into two smaller briskets (4 to 5 lb. each). Cook them in a large roaster for 3 to 4 hours, until fork-tender.

Overnight Method: Cook, tightly covered, in a 225 degrees F oven for 7 to 8 hours. (Put the brisket into the oven just before going to bed and remove it first thing in the morning.)
degrees F.