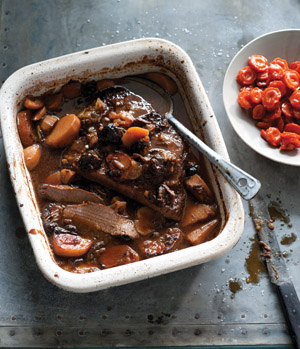 We always ate this sweet brisket at Pesach and Rosh Hashanah. Originally from my grandmother, who was quite secretive with her recipes, my mother learned it by simply watching and copying. Due to ill health, my mother can no longer cook, but we all think and talk about her when I make this dish. It has a particular sweetness for me that goes far beyond its taste.

You will need a saucepan large enough to hold the brisket.
Heat the oil in the pan and brown the brisket on both sides. Add the onion, potato, three-quarters of the prunes and 2 teaspoons of salt. Cover with boiling water and half the golden syrup. Bring to the boil, partially cover, then simmer until quite tender, at least 1¼ hours.
Preheat the oven to 350 degrees
Take the meat out of the liquid and place in an ovenproof dish. Strain and reserve the liquid, and spoon the onion, potato and prunes on top of the brisket. Pour enough liquid into the dish so that it comes halfway up the meat. Top with the remaining prunes and golden syrup. Sprinkle over ½ teaspoon of salt and plenty of pepper. Roast, uncovered, basting every 15 minutes or so, for 1–1½ hours, or until the meat is fork tender.
To serve, sprinkle with the lemon juice.