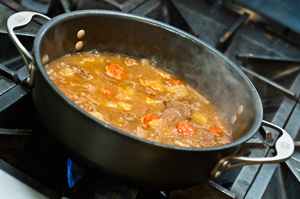 We sell Hungarian Goulash in Hungarian Kosher Foods; it is authentic goulash, made with only meat, potatoes, and onions. For this recipe I have added optional mushrooms and carrots. The secret to making a good goulash is, first, sautéing the meat without any liquid, and second, adding authentic Hungarian paprika. Liquid is only added later with the potatoes. Non-kosher Hungarian goulash also calls for sour cream; however, we do not mix meat and dairy.

Film the bottom of an 8-quart pot with oil. Add the beef, onions, garlic, paprika and pepper. Sauté, on low, stirring frequently, until the meat is browned, then cover, and cook on low, stirring often, until the liquid from the beef and onions has mostly evaporated, about 1 hour. If the liquid has not sufficiently evaporated at the end of cooking, uncover and cook until ½ inch of liquid remains.
After the liquid has evaporated, add flour and stir. Cook to brown, stirring, about 10 minutes, being careful not to burn. Add enough water to cover the meat, stirring until smooth.
Add the potatoes and salt. Add carrots and mushrooms if using. Bring to a boil.
Cover, decrease heat to low, and simmer until potatoes are cooked and meat is tender, about 30 to 45 minutes.
Serve ladled into large bowls, and accompany with fresh bread.