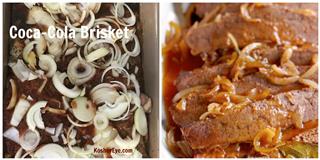 From a family recipe of Eli Evans, author of The Provincials

Place brisket in a dish; cover with four cups of the Coca-Cola and marinate in refrigerator, tightly covered, overnight.

Remove brisket from marinating liquid and drain. Rub meat all over with spice mix. Heat vegetable oil over medium-high heat in a deep, heavy skillet or casserole,  and brown brisket on both sides, about 5 minutes per side.

In a small bowl, combine the onion soup mix, remaining cup of Coca-Cola (if using), 1 cup of ketchup* and 1 cup of water. (If omitting Coca-Cola and ketchup, substitute 3 cups of water). Stir until mixed well. Pour over brisket.

Pour mixture over brisket; surround brisket with sliced onions and bay leaves. Cover casserole with lid, and cook on low for about two hours, checking often. Add some additional boiling water if necessary, to keep the meat from drying out or sticking, and to make the gravy. Simmer until fork tender about 2 to 2 1/2 hours. When cool, slice against the grain. Or, refrigerate overnight, and then slice.

*Some versions of this popular vintage recipe use bottled chili sauce (such as Heinz) instead of ketchup.