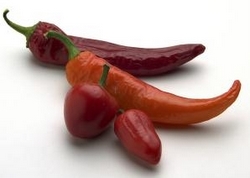 From Challa-Peño, A Mother and Daughter in the Mexican Jewish Kitchen
by Alexandra and Susan Schmidt

The first step of this recipe, browning the meat in the pot, allows it to release its grease, making the meat leaner. From there, the recipe is simply a matter of giving it time to absorb the smoky flavor of the chipotle peppers. (Note: the recipe is written for a non-stick pot, but if you’re not using one, brown the meat in 1 tablespoon of oil.) This dish is a true hybrid of Hungarian and Mexican cooking, combining a typical goulash – stew with meat and potatoes – with Mexican ingredients. When my Hungarian grandmother made goulash, she would accompany it with nockedli, doughy Hungarian dumplings. I prefer to serve it accompanied with white rice and warm tortillas – a meal in itself, if you want to keep it simple.  - Susan

This recipe, like others in our book, uses tomato sauce. While it may not be the fashion of the moment, using whatever you can to get the flavor you want – and doing so without breaking the bank – is a tradition in both the Mexican and Jewish cultures to which we want to stay true. And the flavor in this recipe proves our point. Chipotle beef goulash may be the dish that earned my mom her rep, causing L.A. folks to clamor for an invite to a Shabbat dinner at “The Schmidts’”. It’s such a hearty, pungent dish and has been the focal point of so many important family gatherings, that memories and taste are one and the same.   - Alex

In a heavy large non-stick pot over high heat, brown the beef. When the beef is browned on all sides, about 5-10 minutes, transfer to a large colander to drain liquid that has been released and rinse under cold water. Return the beef to the pot and set aside. Lightly score a large ‘x’ on the bottom of each tomato. In a large saucepan bring 1 ½ quarts water to a boil over high heat. Carefully add the tomatoes and boil uncovered for 5-10 minutes or until the tomato skin just breaks. Remove the tomatoes with a slotted spoon and set aside until cool enough to touch. Peel tomatoes and cut into quarters.

For the sauce: Working in two separate batches, place half of the tomatoes, onion, garlic, tomato sauce, tomato paste, chipotle peppers in adobo sauce, cilantro sprigs, salt, and 1 cup cold water into a blender and puree until consistency is thick and smooth, about 1 minute. Add pureed mixture to the beef in the pot. Puree remaining ingredients with 1 cup cold water and add to the beef. Bring pot to a boil over high heat and boil 3-5 minutes uncovered or until bubbling. Add paprika, reduce heat to low, cover and simmer 1 hour, stirring occasionally or until meat is cooked but not falling apart.  Stir in carrots and continue simmering 45 minutes or until carrots are tender. Stir in potatoes and simmer until they are tender, about 30 minutes.