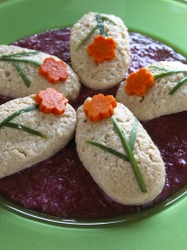 This could be the only time you see flavored gelatin in one of my recipes!  That said, this, easy and beautiful recipe replaces the individual plates of garnished fish ovals that precariously balance on a shelf in your refrigerator waiting to be served during your Seder.

Remove gefilte fish from the jar and put in a large, shallow casserole or serving dish.

Pour liquid mixture around the gefilte fish and a little on top to act as "glue" for the carrot and scallions.

Cut the carrot slices with a teeny flower shaped cutter, or with a knife to resemble a flower.  Cut thin curved slices from the green part of the scallion.

Strategically place the carrot shapes and scallion slices on the gefilte fish pieces to resemble flowers and leaves.  Chill and serve when firm.