My Favorite Brisket (Not Too Gedempte Fleysch) 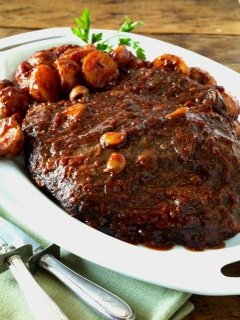 Because a brisket stretched into many meals, it was an economical cut for large families in Europe. Leftovers were ground up to stuff knishes or kreplach. The meaty gravy became the base for a midweek cabbage or potato soup or a sauce to cover pompushki, Ukrainian baked dumplings, which resemble Pepperidge Farm's rolls. In this country it became particularly popular.

Brisket comes from the front quarters of the steer, the chest area. The whole piece of meat, from three to ten pounds, is potted (hence the term pot roast) and cooked slowly for hours. Brisket needs to be simmered slowly to transform it into the succulent morsels I remember as a child. It is a dish I serve frequently – on Friday night, at holidays, and at dinner parties.

Sprinkle the salt and pepper over the brisket and rub with the garlic. Sear the brisket in the oil and then place, fat side up, on top of the onions in a large casserole. Cover with the tomatoes, red wine, celery, bay leaf, thyme, and rosemary.
Cover and bake in a preheated 325-degree oven for about 3 hours, basting often with pan juices.
Add the parsley and carrots and bake, uncovered, for 30 minutes more or until the carrots are cooked. To test for doneness, stick a fork in the flat (thinner or leaner end of the brisket). When there is a light pull on the fork as it is removed from the meat, it is "fork tender."
This dish is best prepared in advance and refrigerated so that the fat can be easily skimmed from the surface of the gravy. Trim off all the visible fat from the cold brisket. Then place the brisket, on what was the fat side down, on a cutting board. Look for the grain – that is, the muscle lines of the brisket – and with a sharp knife, cut across the grain.
When ready to serve, reheat the gravy.
Put the sliced brisket in a roasting pan. Pour the hot gravy on the meat, cover, and reheat in a preheated 350-degree oven for 45 minutes. Some people like to strain the gravy, but I prefer to keep the onions because they are so delicious.

For Passover serve with potato pancakes or potato kugel. A colorful salad goes well with this.