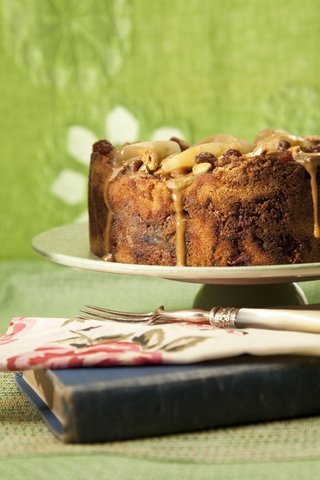 We had just completed shooting the photograph of this cake when our food stylist turned to me as said 'This cake looks so delicious, I have to try it.' Her facial expressions and groans of sheer delight as she ate the first slice and began cutting the next left us speechless! Not because of her outwards signs of absolute satisfaction or the fact that she wanted to take the whole cake home, but because who enjoys or even wants to eat a Pesachdikke cake when it isn't even Pesach!

Preheat the oven to 325 F
Peel, core and cut the apples into eighths.
Place the apples into a small – medium sized saucepan, cover with the water and bring to the boil.
Once boiling, switch off the heat, stir and cover with a lid. Allow the apples to stand and soften in the hot liquid until cool. Then drain.
Mix the pecan nuts, sugar and cinnamon in a bowl until well combined and set aside.
In a separate bowl, beat the eggs and sugar until light and creamy.
Add the oil and vanilla essence and continue to beat until well combined.
Stir in the matzo meal and bicarbonate of soda and blend well.
Pour half the batter into a rectangular baking tin (a 10 inch square foil container will also do) and sprinkle over half of the pecan mixture.
Combine the apples and raisins and spoon half over the pecan layer.
Pour over the other half of the batter, followed by the remaining apples and raisins. Sprinkle over the remaining pecan mixture and bake in the oven for 1 hour, then switch the oven off and leave it in for another 15 -20 minutes.
While the cake is baking, make the toffee sauce. Bring the water and sugar to the boil. Once it starts to turn caramel in color, remove from the heat, add the creamer and mix well.
Remove the cake from the oven and pour over the toffee sauce. Serve at room temperature.
This cake keeps well in the fridge, covered in cling film or tightly fitted foil.