Stuffed Roll of Beef - with a "bit on the side" 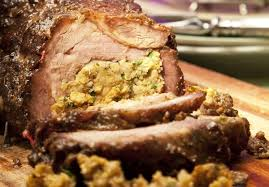 If you don't feel like stuffing your roll of beef, then just order a roll of beef from your butcher, which will come already rolled and tied with string. You can take about 50 - 60 minutes off the cooking time if it isn't stuffed.
If you want to stuff it, then tell your butcher not to roll it but to send the cooking elastic bands so that you can roll it yourself. You can either ask your butcher to rub only one side of the meat with Greek/Roast Beef spice. The stuffing should then be placed on the side that is not spiced. When you roll the beef, the spiced side must be on the outside. You can also make your own spice rub as per recipe below. Once I'm making the spice up, I like to double or even triple up on the spice recipe and keep what I don't use in an airtight jar.

Fry onions in oil until golden brown. (Browning the onions gives it that special taste)
Add mushrooms, sage and parsley and allow most of liquid from the mushrooms to evaporate.
Add cooled stock and matzo meal and mix well.
The stuffing should be quite firm (you may need to add a little more matzo meal) as it will soften with the juices given off by the meat during cooking.
Add salt and pepper to taste.
Spice once side of the roast with homemade spice rub if it hasn't been pre-spiced by butcher by rubbing the outside of the meat with a little oil and rubbing in spice rub.
Place stuffing onto the unspiced side of your meat.
Roll meat up and place cooking elastics around it to secure the roll. If stuffing oozes out while rolling, just stuff it back in! That's why it's called stuffing!!

Place into a transparent roasting bag and carefully place oil-drizzled potatoes and onions (cut in ¼'s) "on the side" !
Roast in a preheated 350 F oven for 1 hour, then reduce heat to 300 F and continue to cook for a further 2 hours. It may take a little longer as it is stuffed and no two pieces of meat are the same size. This cut of meat can be cooked a little longer rather than shorter. The meat and vegetables should be golden brown.