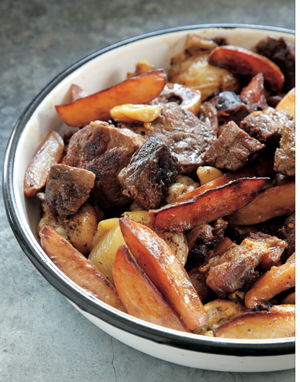 For Sephardic Jews who descend from the Balkans, this casserole evokes memories of Friday-night dinners. The term sofrito does not refer to a specific dish but rather to a technique: First, potatoes are briefly deep-fried and then added to a pot where beef or chicken has been slowly braising. The result is a golden-brown pot roast with meltingly tender meat and potatoes that have retained their shape despite the lengthy cooking.

Apparently not just Sephardic Jews yearn for food cooked this way. For many years, I have been trying to re-create my grandmother Rosa's zharkoye ("pot roast" in Russian). I prepared a few recipes by the same name, but none came close, until I made a sofrito. It had that juicy yet crispy texture and the deep flavors I was looking for. Rosa was a native of Bessarabia (a province of Romania), and her cooking, though formally Ashkenazi, was strongly influenced by the Balkans. Who knows? Perhaps it was sofrito I was looking for all these years.
Note: Authentic sofrito calls for deep-frying the potatoes, but I found that roasting them produces almost identical results with much less oil involved.
Excerpted from JEWISH SOUL FOOD by Janna Gur. Copyright © 2014 by Janna Gur. Excerpted by permission of Schocken, a division of Random House LLC. All rights reserved.

Heat half of the oil in a large heavy pot or casserole over medium-high heat. Add the meat and brown on all sides. Season with salt, pepper, and turmeric.
Add the garlic and boiling water, cover with a tight-fitting lid, reduce the heat to the minimum, and cook for 2 hours. Add a bit of water if the liquid in the pot dries out. The idea is to cook the dish in as little liquid as possible.
While the meat is cooking, preheat the oven to 400°F (200°C).
Arrange the potato wedges on a baking sheet, drizzle with the remaining oil, and sprinkle with salt and pepper.
Roast for 15 minutes, until the potatoes are golden and crisp on the out¬side and partially cooked inside.
Add the potato wedges to the pot with the meat (after it has cooked for about 2 hours). Cover and simmer on the lowest heat for another hour.

Variations
• Chicken Sofrito Substitute 10 chicken thighs and/or drumsticks for the beef.
• Substitute the same amount of unpeeled fingerlings or other very small potatoes for the potato wedges.
• Add 6 to 8 very small, whole peeled onions together with the meat.
• Add 2 teaspoons baharat spice mix (see page 150) with the salt and pepper.
• As a homage to my grandmother's zharkoye, I sometimes add 10 to 12 prunes to the casserole along with the liquids.
Serves about 6-8