Passover with the Stars 2016 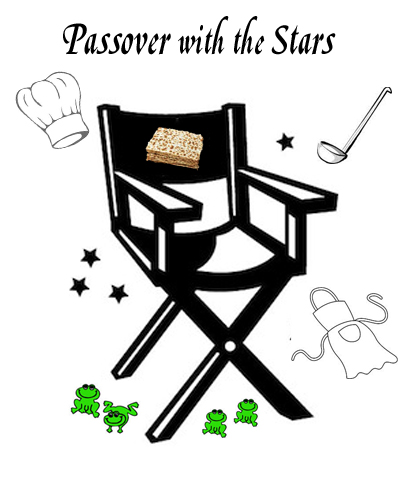 Our popular series Cooking with the Stars returns as we gather around the Passover table, sharing favorite recipes from some guest culinary stars. Some of these recipes are beloved heirlooms; some are updated treasures, several are new and contemporary. All are truly delicious! We have included some updated links to our past galaxy of culinary stars as well, and will be adding new recipes often.

We thank our STARS for sharing their cherished family food jewels, and wish them all a happy, kosher Passover!
The KosherEye Passover HOTLINE is open for your questions through April 22. Send your comments or questions to contactkoshereye@gmail.com

Helen is an online kosher cooking star in England, and fast becoming well known in the U.S; Her website Family-Friends-Food shares her favorite kosher recipes, most of which she cooks for family and friends. Helen published her  first book Helen's Delicious Pesach  in 2015 and  features 8-days-worth of breakfasts, meat-free main dishes, side dishes and salads, potato dishes, and cakes & desserts, ensuring that Pesach mealtimes will be memorable for all the right reasons. The cookbook's recipes are all naturally gluten-free, and are also free from kitnyot gebrokhts. All the recipes are tried and tested in Helen's family kitchen. Most are so delicious that you'll want to eat them all year! Her book can be purchased on Amazon. Try Helen's recipe for Indulgent Pesach Tiramisu

Dr. Jonathan Margolin came to kosher at age 12. So, he understands the taste and flavors of non-kosher. His food experiences vary from a trip to Boston to have lobster, mornings at McDonalds’s, Gyros in Queens, NY, to a breakfast of dim sum and steamed meat buns in Chinatown. His current life combines his profession in the healing arts. He is a Podiatrist, and for the past 16 years has been a practicing owner of  Teaneck Podiatry, LLC in Teaneck, NJ.  His second passion is food, and after attaining  a professional certificate from the Center for Kosher Culinary Arts (CKCA),he has created Toque & Scalpel to bring cutting edge kosher cuisine to others passionate about food. Through his website and blog, he shares recipes, cooking techniques, and more. Try Jonathan's recipe for Quinoa Gumbo

Mia is a clinically licensed psychotherapist in Los Angeles, California specializing in working with the Jewish community. In addition to her ten-plus years of experience as a therapist, she has over 20 years of experience in the worlds of education, non-profit organizations, and public speaking. She is a professional writer with two books and numerous articles published at www,miaadlerozair.com. Most notably, Mia is the mom to nine kids--yes nine! Three of hers, four of his, and two of theirs, providing Mia with plenty of opportunity to have fun in the kitchen and to share her recipes, and that of family and friends in her book  "Cook, Pray, Eat Kosher." Try Mia's recipe for Simple Brisket

Lauren Stacy Berdy earned her professional diploma from Ecole de Cuisine, La Varenne Paris, France in 1978, then spent a few years working in Europe before bringing it home. She spent more than three decades as a private chef-caterer. She now resides 130 paces from the beach with her husband in Hollywood, Florida, where she wrote Remaining Kosher Volume One: A Cookbook For All With A Hechsher In Their Heart. This eBook is available on iTunes. Volume Two is well on its way. Try Lauren's recipe for Red Onion Jam.

Dini is an enthusiastic foodie, personal chef and the founder of Dini Delivers.
She graduated from the Center or Kosher Culinary Arts (CKCA) in 2011 with a Servsafe certification, and followed up her training with an externship at The Prime Grill
On her YouTube channel (Dini Delivers) Dini showcases her unique cooking style and her relatable personality. Dini frequently performs cooking demos, does live TV cooking appearances, and gives private cooking classes for aspiring cooks of all ages. Her most recent project is her partnership with Above and Beyond Catering, a New Jersey based catering company, enabling her to deliver larger events such as weddings, bar/bat mitzvahs, and everything in between
In addition to serving as a personal chef, Dini write articles for food magazines and websites including The Feedfeed and Refinery 29 , contributes to cookbooks, collaborates with brands and companies on her videos, and writes guest blog posts. Dini lives with her husband and two daughters in New Rochelle, NY. Try Dini's recipe for Crackling Brownie Meringues.

Amy Kritzer, Author, Sweet Noshings, Founder, What Jew Wanna Eat
Amy Kritzer is an award winning food writer, recipe developer, founder of the cooking blog What Jew Wanna Eat. On her popular site, Amy provides traditional Jewish recipes with a modern twist in ingredients and style such as Tex Mex Potato Latkes or Chocolate Hazelnut Rugelach. After moving from New York City to Austin, TX in 2009 to escape cold weather, she discovered her love of queso, country music, and cooking. Soon after moving, Amy left the business world to attend Le Cordon Bleu Culinary School to hone her cooking skills and work on her passion. Her recipes and writing have been featured in numerous publications and websites including The Today Show, Cosmopolitan and Bon Appetit. She is a regular cooking demonstrator on KXAN Austin. In 2012 she was a finalist in Daily Candy’s Start Small Go Big small business competition and in 2013 Relish Magazine named her a Top 5 Jewish Blogger. Jewish Woman Magazine called her a chef to watch in 2013. Her first book, Sweet Noshings, comes out in August 2016.  Try Amy's recipe for Flourless Orange Chocolate Fudge Cupcakes.

Chef Alon Shaya discovered his passion for cooking at an early age, spending most of his time in the kitchen with his mother and grandmother. He was born in Israel, and raised in Philadelphia.
In 2003, Alon moved to New Orleans where he began training under Chef John Besh., and after Hurricane Katrina, Alon moved to Italy to continue to explore his passion for Italian cooking.
In 2010, Esquire Magazine named Alon one of four Chefs to Watch, and he was named one of the "50 people changing the South" by Southern Living Magazine in 2015. In 2015, Alon was awarded the James Beard Foundation's Award for "Best Chef – South". Later that year, Alon was named one of “50 most influential American Jews in America” by The Forward, as well as one of Tasting Table’s “46 Chefs Who Ruled the Kitchen in 2015” and The Daily Meal’s “15 Top Chefs of 2015.” Additionally, New Orleans Magazine’ named him “Chef of the Year”. Esquire named Shaya “The Best New Restaurant in America” in 2015. Alon Shaya is Executive Chef and Partner of three acclaimed New Orleans’ restaurants Domenica, Pizza Domenica and Shaya, all honored by prestigious publications worldwide. (No, these restaurants are not kosher.) We are delighted to present his kosher for Passover recipe for Matzo Ball Soup .

Sandy Leibowitz was born to a Colombian-Argentinean Jewish family, and is a graduate of the Culinary Institute of America. She has been cooking for over 15 years, and currently cooks and blogs about delicious food that happens to be kosher at thekoshertomato.com.  In 2007, she started her Chef Service company, "The Kosher Tomato", which included personal chef meals, cooking parties, and demonstrations.She also taught several cooking and technique classes at the Center for Kosher Culinary Arts (CKCA). She has been featured as one of the "HEEB 100" (Jews doing cool things). Try Sandy's family recipe for Brisket Sancocho.