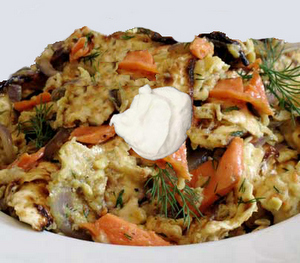 Matzo Brei has evolved from a Passover breakfast staple to a gourmet year–round meal option with many contemporary variations. It can be served as a side dish, an entrée or dessert at any time of the year. Our Classic Basic Matzo Brei recipe goes "up a notch" with some delicious add-ins. All are Passover friendly, and comforting  year round.

Break matzos up into 2”– 3” pieces.
Place matzos in a bowl. Pour hot or boiling water over matzo; let sit about 2 minutes, turning occasionally with a spatula or hands. Gently, drain and squeeze out water. Matzo should be softened but not “mushy”.
Whisk the eggs in a bowl, season with salt. Combine matzo and egg mixture.
Heat oil or butter (or a combination) in a large, non-stick pan. Add softened matzo mixture. Fry approximately 4 minutes over medium heat until golden brown.
Flip over in one piece for a single “frittata” pancake style matzo brei, or break up matzo pieces and turn over like a “scramble”. In any case, fry on both sides until golden brown and sizzling!
Serve hot.

MATZO BREI - A HISTORY
When translated from Yiddish, the words matzo brei are usually thought to mean fried matzo, or matzo crumble, a classic combination of eggs and matzo, fried in oil, butter, margarine or schmaltz (rendered chicken fat). It can be sweet or savory, scrambled or pancake like, and through the years has taken on numerous, countless variations in taste, ingredient and preparation.
Recipes for matzo brei have been handed down for generations. According to food historian Gil Marks, in his James Beard award–winning book Encyclopedia of Jewish Food (Wiley), the first reference to fried “Matsos” was found in The Jewish Manual (London, 1846). Eggs were recorded as part of the recipe in Aunt Babette's Cook Book (Cincinnati, 1889) in a recipe entitled “Ueberschlagene Matzos”, and then again referenced in The Settlement Cook Book 1903 with a recipe entitled “Matzos Pancakes”.

Matzo Brei has evolved from a Passover breakfast staple enjoyed at Bubbie’s house, to a gourmet year–round meal option with many contemporary variations. Although it still remains a nostalgic, popular and delicious Passover dish, it is not unusual to find matzo brei containing lox and capers topped with crème fraîche, or garnished with fresh fruit on restaurant menus. And, for those into more healthful eating and whole grains, matzo brei can be made with whole wheat or spelt matzos! It can be served as a side dish, an entrée or dessert at any time of the year. We present some variations, which are all Passover friendly, but comforting and delicious year round.
We started with a basic Matzo Brei recipe and, with some variations (eight of them), turned it into something "New". Enjoy these recipes for Classic Basic Matzo Brei with Variations – including Cinnamon Toast, Bananas Foster, The Deli Special, Tex–Mex, Caramelized Onion, Lox and Cream Cheese, Italian, Coffee Cake. Enjoy!