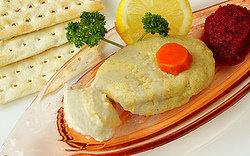 From Adventures in Bubby Irma's Kitchen

Making gefilte fish is a challenge. My mother made it − my grandmother made it − and I had to make it. In order to become a real Balabusta (woman of the house) I had to prove myself in the kitchen. Challah, chicken soup, and gefilte fish had to be made. Once they were tried and successful - you knew that you were on the way to becoming a Balabusta. The first time I made it -- I was so proud.

2 1/4 pounds fresh ground fish -- either carp or a mixture of carp, white fish and/or pike. The fishes can be mixed. Nile perch is a new addition to our list of fishes. Nile perch is used alone.

Grind together all the Ingredients, and then mix in the ground fish. At this point the fish may be formed into logs -- approx 3" wide and 12" long - wrapped tightly into tin foil for freezing. Frozen fish may be cooked in the log form. It is easy to slice for individual servings. Or, ovals about the size of a pear can be formed. Drop them into boiling sauce and allow them to cook slowly for 2 hours. Let cool before removing the fish balls from the sauce.

Bring to a boil and add the fish balls or logs.

Serve with Horseradish on a bed of lettuce. A slice of the cooked carrot adds color to the dish.