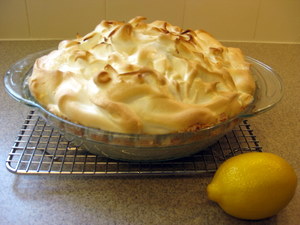 This is an amazing Lemon Meringue pie for Passover!  The lemony flavor is just wonderful after a Seder meal!  The crust is like an almond cookie and the filling is tart and refreshing. Don’t be intimidated by the length of the recipe, I tried to give step-by-step instructions so your pie will be foolproof! Enjoy!

Crust: Pulse the almonds, matzo cake meal, salt, and sugars together in a food processor with the knife blade until almonds are finely ground and there are no big pieces of almond left.  Add the almond extract and egg whites, and pulse until it forms a sticky, well-blended dough.  Pat it out in a greased pie plate with the back of a fork until you have an even layer of crust.  Bake for 14-15 minutes until crust is golden.  You can prepare the crust the day before you need it.  Just let it cool completely and wrap tightly in plastic wrap. If you are going to use it immediately, then let it cool to room temperature before proceeding with the rest of the recipe.

Filling: Zest lemons and juice lemons (as above) and set aside.  Separate eggs, putting the egg yolks in a medium sized bowl and the egg whites in a mixer bowl and set aside to make the meringue.  Combine the lemon juice and lemon extract with the yolks, whisk thoroughly and set aside. Put about 1 ½ cups of water in a clean pan and heat until boiling, keep it slowly boiling as you make the filling, you may need some of this boiling water to thin out the filling a bit.  In another saucepot whisk the sugar, potato starch, and salt until well blended.  Add 1 ½ cups cold water and whisk thoroughly until there are no lumps.  Turn on the heat and bring to a boil, whisking constantly and stir until clear and thickened, about 3 minutes.  Turn down the heat under the sugar/potato starch mixture and add about 1/3 cup of this thickened mixture to the egg yolks, whisking constantly to blend and to temper the yolks with the hot sugar mixture.  Then scrape this egg yolk mixture back to the saucepan with the remaining sugar/potato starch mixture.  With a wire whisk, stir the mixture quickly and constantly as it heats. If it is too thick, add some of the boiling water (about ¼ cup at a time as needed). Bring to a boil, whisking vigorously for about 1-2 minutes until the mixture is thickened but still pourable. Remove from the heat and add the margarine, stirring constantly until it is incorporated.  Put the lemon zest into a large, clean bowl. Strain the lemon/egg yolk/potato starch mixture through a fine mesh strainer into the bowl with the lemon zest, using a spatula to press the mixture through the sieve. Transfer the mixture to the pie crust, while the mixture is still hot (the pie crust should be at room temperature).

Meringue: In the bowl of an electric mixer, beat the egg whites until foamy. Add the vanilla extract and lemon juice and beat until soft peaks form. Slowly add the sugar into the whites with the motor of the mixer running at high speed. Beat until the egg white are starting to form peaks.  Then beat the whites for an additional 2-3 minutes at highest speed until shiny and hold stiff peaks.   Put the filled pie shell into the oven and cook for about 4-5 minutes.  Take out of the oven and while piping hot, immediately top the custard with meringue by spreading a band of meringue around the edge of the crust before you mound the meringue into the center.  Make sure the meringue is spread to the edge of the crust and adheres well so it will not pull away from the crust while baking.   Transfer to the oven. Bake until browned, about 12-15 minutes.  Watch it so the meringue doesn’t get too browned!  Cool on a rack for about 30 minutes and then refrigerate until ready to serve.  The pie must be refrigerated for about an hour or two before serving.