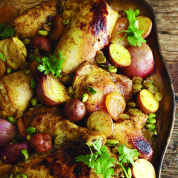 During the developing and testing process for this book, this dish became Hubby's new favorite. Totally unexpected –I was sure he'd steal a line from the kids and say, "Thank you anyway, but this is not my taste". We taught them to say that instead of "Oooo yuck") It's just not the usual stuff and spices he goes for, but apparently the combination was soooo his taste. And mine, too. It's one of those winner recipes that will make you dance around your kitchen. You may hug me now.

Preheat the oven to 350°F. Line a baking sheet with aluminum foil; spray the foil with cooking spray.

Mix together the honey, olive oil, cumin, turmeric, cinnamon, and garlic in a small bowl. Place the chicken, onions, and potatoes in a large bowl. Toss with three-quarters of the honey mixture and arrange in a single layer on the prepared pan. Toss the apricots and raisins with the remaining honey mixture and set aside.

Bake the chicken, onions, and potatoes for 35 minutes. Add the apricots and raisins and bake until the chicken is cooked through, 15 to 20 minutes more. Garnish with the pistachios and cilantro.
Serves 4