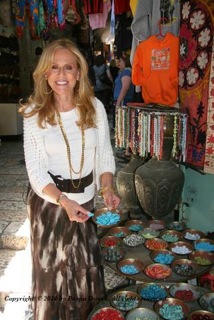 Poopa Dweck is an expert on the food and customs of the Jews of Aleppo, historically one of the largest and most flourishing communities of Sephardic Jews. She is best known as the author of the stunning cookbook Aromas of Aleppo: The Legendary Cuisine of Syrian Jews

featured in the New York Times Magazine and winner of the National Jewish Book Award in 2007. Aromas has led Poopa to lectures, book tours and cooking demonstrations in venues all over the world. A Hebrew-language edition has been published.
Poopa appreciates the spiritual richness of Jewish observance and the role of the Jewish woman within it. The Arabic concept of suffeh, she explains, refers to a woman's intelligence and intuition, allowing her to create a welcoming, well-ordered family life that allows the Divine Presence to dwell within. By documenting and preserving the foodways and customs of her heritage, Poopa hopes to inspire ethnic groups everywhere to revisit their roots and celebrate the concept of family.

Rosh Hashanah literally Means "The Beginning Of The Year." In Hebrew It Is Called Yom Ha Din, "The Day Of Judgment," when the Jewish people stand before G-D to  be judged. This Holiday Is both a joyous celebration of  the Jewish month of Tishrei and the start of the solemn ten high holy days during which Jews engage in profound introspection and entreat G-d  to inscribe their names in the book of life for the coming year. Aleppian Jews cultivate this spirit of repentance during the preceding month of Elul by reciting Selihot (early morning prayers of forgiveness) daily and attending services, which are led by a panel of three rabbis, who annul the congregants' unfulfilled vows and promises-- so that they have a "clean record" before Rosh Hashanah.

The New Year Meal
The foods of the New Year holiday symbolize a wish for a sweet year. Aleppian Jews eat several symbolic foods during the Rosh Hashanah dinner, including sugar-dipped apples, candied quince, dates, pomegranates, and lamb's head. Anything sour, bitter, or overly spicy is avoided. A food  that is customarily not eaten is nuts, for two reasons.  First, pragmatically speaking, according to tradition, nuts cause the production of excess phlegm in the nasal and throat area, which can hinder the ability to recite prayers (the main focus of the holiday). The other reason is that according to gematria, a numerological system based on the Hebrew alphabet, the numerical value of the word "nut" is the same as that for the Hebrew word for "sin,"

Some symbolic foods for the New Year Feast include:
Dates, Apples, Leeks, Swiss chard, Gourd, Black Eyed Peas, Pomegranate and Lamb's Head. The new fruit is a very special part of the meal. Following the rite of eating each of the symbolic foods, Aleppian Jews indulge in a fruit that just comes into season. The fruit chosen for this honor is simply a matter of preference. Among some recommended exotic fruits are cherimoya, starfruit, prickly pear, rambutan, mangosteen, jackfruit, and dragon fruit.