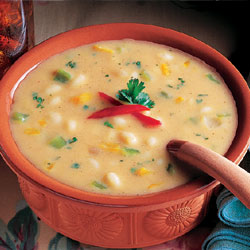 Jeff Nathan is Executive Chef and co-owner of Abigael's on Broadway.  He is an award-winning chef, restaurateur and cookbook author of two best selling books, Adventures in Jewish Cooking

Place the sweet potatoes and apples on an oiled sheet pan and bake in a 325˚ F. oven approximately 75 minutes, until soft and overcooked. Remove from the oven and allow to cool. When cool enough to handle, peel and puree in a food processor.

Meanwhile, in a 6-quart soup pot, heat the vegetable stock and simmer. Add the puree in batches to the stock. Whisk until all the puree is incorporated. Add the oat or soy milk, creamed corn, spices and honey. Bring back to a simmer over medium-high heat.

In a separate sauté pan heat the oil. Add the corn kernels, bell peppers and onion. Heat until onions are golden. Add in the cilantro and chili spice. Mix well.

Serve hot soup with a garnish of the seasoned corn at time of service.
6 – 8 servings