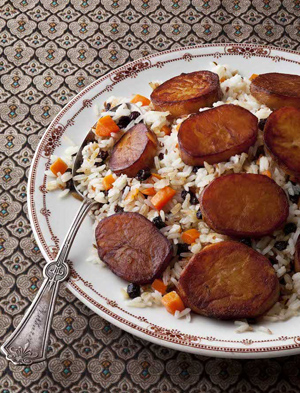 Chef Einat Admony is author of the fabulous cookbook Balaboosta: Bold Mediterranean Recipes to Feed the People You Love. This recipe is excerpted from Balaboosta (Artisan Books). Copyright © 2013. Photographs by Quentin Bacon.

Bring 4 quarts of water and ¼ cup salt to a boil (it may seem like a lot of salt, but the goal is to cook the rice as you would pasta). Meanwhile, rinse the rice in cold water; repeat until the water is clear. Add the rice to the boiling pot and cook until it is almost tender but still crunchy in the middle, 5 to 7 minutes.

Since you're cooking the rice for only about 10 minutes, there will still be plenty of liquid remaining. When the rice is al dente, drain in a fine mesh sieve and rinse under cold water. Drain completely, and then dump it into a large bowl.

While the rice is cooking, slice the potatoes into ¼-inch thick rounds. Heat ¼ cup of the oil in a Dutch oven or other large, heavy pot over medium heat. Stir in the turmeric. Arrange the potatoes in a single layer at the bottom of the pot; making sure that all the pieces fit snuggly. Sprinkle a pinch or two of salt over the potatoes. Saute them until crisp and golden, about 5 minutes, then flip them over to cook the other side, about 20 minutes altogether. Remove from the heat.

Heat the remaining 2 tablespoons of oil in a skillet then add the carrots, currants, and cumin seeds. Stir frequently and sauté until the carrots are slightly softened, about 5 minutes. Remove from the heat and scrape the carrot mixture into the bowl of rice and toss to combine. Transfer the rice mixture into the Dutch oven on top of the potatoes, then drape a kitchen towel over the pot to prevent any steam from escaping. Place the lid right over the towel, gather the ends of the towel, and bunch them on top of the lid.

Place the pot over low, low heat and cook until the rice is tender, about 1 hour. You can serve this dish two ways – by inverting the entire pot of rice over onto a large platter or by scooping the rice onto a dish and then placing the potato slices on top. I always hold my breath when I flip the entire pot of rice over, and it doesn't always have a fairy-tale ending. So I usually cheat and go the other route.
Serves 4 to 6