The greatest thing since sliced bread; simple combos that turn boxed stuffing into a standout side dish. The following two recipes start with 1 12–16 ounce package stuffing mix, prepared according to the package directions (but not baked). November 2012/RealSimple.com.

Mushrooms, Chestnuts, and Swiss Chard:
In a large skillet,over mediuim heat, cook the 10 ounces of button mushrooms, sliced, with 1/4 teaspoon each kosher salt and black pepper in 2 tablesponns canola oil until tender – 3 to 4 minutes.

Add the 1/4 cup coarsely chopped jarred chestunuts and 1 bunch Swiss chard (about 1 pound, steams discarded and leaves chopped) and cook until the chard is wilted, 3 to 3 minutes more. Fold into the stuffing mix and bake according to the package diretions. Serves 8. 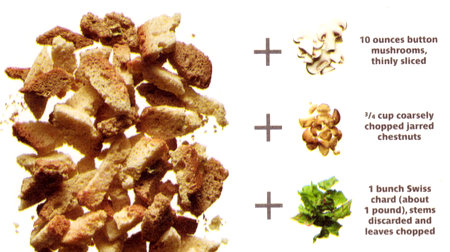 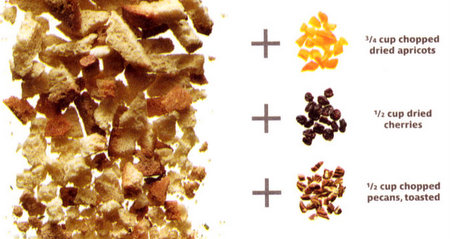