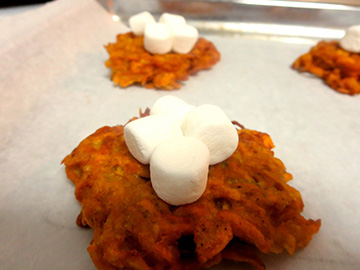 Peel and coarsely grate the sweet potatoes.
Place grated potatoes in a dish towel and wring out as much excess liquid as possible.
Heat oil in a deep 12-inch skillet over moderately high heat.
In a medium sized bowl, stir together potatoes, flour, salt, pumpkin pie spice and brown sugar
Lightly beat eggs in a small bowl. Fold eggs into potato mixture until combined.
Heat oil
Spoon 1/8 cup potato mixture per latke into the oil. Flatten with a spatula. Don't crowd the pan!
Reduce heat to moderate and cook until golden brown, about 1 ½ or 2 minutes per side.
Transfer latkes to a cookie rack to drain (paper towels also work, but can make latkes soggy).
Turn on your oven's broiler. Place latkes on a baking sheet lined with parchment paper and top each latke with marshmallows. Put latkes and marshmallows in the oven and watch carefully to make sure the marshmallows don't brown too much.
Once marshmallows are nicely toasted, plate your latkes and enjoy!