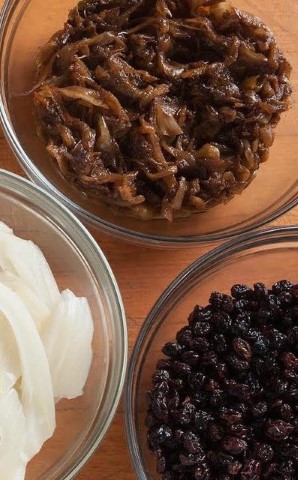 Onion Jam:
Put the peeled lemon zest into a small saucepan. Cover with 2 cups cold water. Bring to a boil. Drain, repeat this twice. Takes away the lemon peels bitterness.
Roughly chop the lemon peel.
Pour in ¼ cup of olive oil into a saucepan over medium heat. Stir in the blanched, chopped lemon peel and bay leaf. Heat the lemon peel and bay leaf in the oil for 30 seconds.
Add in the sliced white or red onions. Stir and cover. The onions should make noise when hitting the oil.
Cook the onions over medium heat until they soften and begin to color. Stir occasionally.
Cook about 10 minutes, then take the cover off. Add two overflowing tablespoons of honey and ¼ cup cider vinegar. Stir.
Cook until the onions are well caramelized- about five minutes. The onions will look thick and “jammy.” Scrape the onions into a bowl. Take out the bay leaf. Set aside.
Fennel:
Slice off fennel "stalks". Remove the hard first layer of the fennel bulb: both great for flavoring soup broth.
Hold the fennel so that the fat part of the bulb is directly in front of you. Cut the bulb in half. Place each half cut side down. Slice off the root bottom of each half (discard).
Slice each half into ¼” slices: wash, check, drain. Place in a steamer and cook for ½ hour.

Lauren Stacy Berdy earned her professional diploma from Ecole de Cuisine La Varenne, Paris, France in 1978, then spent a few years working in Europe before bringing it home. She spent more than three decades as a private chef-caterer.
Lauren resides 130 paces from the beach with her husband in Hollywood, Florida, where she wrote Remaining Kosher Volume One: A Cookbook For All With A Hechsher In Their Heart. This iBook is available on iTunes. Volume Two is well on its way.