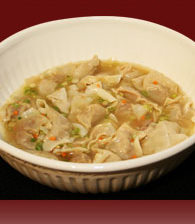 The raw dumplings can be frozen for up to two months. Freedman-Izquierdo, who was limited to eight ingredients by contest rules, suggests adding chopped green onion and grated carrot to the broth as garnish.

Scoop 1 level tablespoon of the mixture into the center of a dumpling wrapper. Moisten the rim of one half of the wrapper with water. Fold the wrapper in half and press along the edge to seal. (This will form a triangle if using square wrappers, a half moon with round.) Place dumplings on a tray in a single layer.

Bring chicken broth to a boil in a 3-quart pot. Gently drop in dumplings, one at a time. Use a rubber spatula to skim along the bottom of the pot every so often to keep the dumplings from sticking. Bring to a boil, reduce heat to a simmer and cook 5 to 6 minutes, until the turkey is cooked and dough is soft. Makes 6 servings.