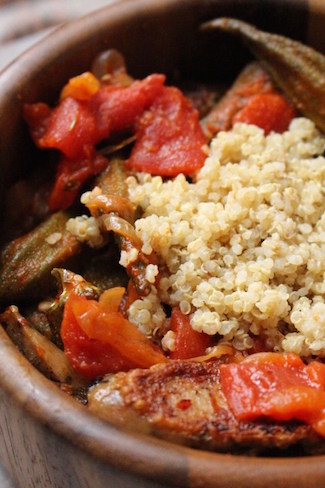 Quinoa Gumbo was created by Jonathan Margolin of  Toque and Scalpel. This dish is a Creole inspiration for Passover. The history of gumbo originates from the southern Louisiana Creole people as far back as the 18th century. The southern part of Louisiana cooking and flavor influences are from West African, France, Spain, Germany, and Choctaw Native people. Most gumbo consists primarily of a stock, okra, meat, a thickener or roux, vegetables and spices. The recipe was not made with a roux so that it can be used on Passover. Gumbo is traditionally served over rice, but in this recipe it is served with Quinoa. I used a spicy turkey sausage, so I did not add any other spicy flavors to the dish so not to over power the dish. This stew is hearted and flavorful. It will be a great dish for your Passover meal this holiday.

Place 1 tablespoon of the oil in a deep pan over medium-high heat. When hot, add the sausage, and cook until it’s golden brown on all or most sides. Transfer the sausage to a plate.
Place the okra in the pan stirring occasionally, until it begins to brown a little, then add the onions and sauté them until they are soft and translucent, 2 to 3 minutes.
Add the garlic and cook for another minute or so, stirring once or twice, and then add the creole spice.Then the tomatoes,stock and sausage are added to the pan.
Bring the mixture to a boil, then lower the heat to a gentle simmer. Cook, uncovered, stirring once in a while, until the okra is very tender and the sauce has thickened, about 45 minutes.
Serve with cooked quinoa.

*KosherEye note: The spicy turkey used in this recipe was sourced from KOL Foods. If you cannot find this spicy turkey sausage for Passover, we suggest taking the seasoning "up a notch" with a homemade creole or cajun spice mix.