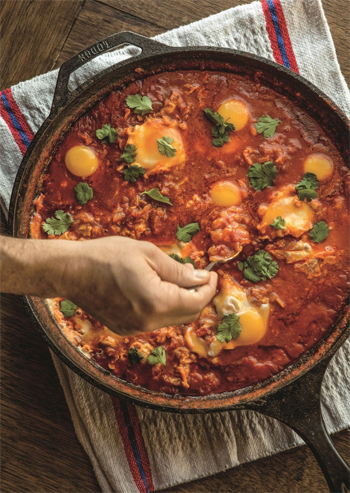 Shakshouka recipe from Zahav: A World of Israeli Cooking. Copyright ©2015 by Michael Solomonov and Steven Cook. Used by permission of Houghton Mifflin Harcourt.

Shakshouka is a simple and quick North African dish of eggs poached in a spicy stew of tomatoes and peppers that packs a punch. It’s a great, large-format brunch dish to feed a crowd. Shakshouka is another great example of a dish that came from elsewhere but is now essential to Israeli cuisine.

Much of this has to do with economics. Tomatoes and peppers grow year-round in Israel, and eggs are an inexpensive source of protein. Shakshouka became an economical way to create a nutritious and flavorful meal. Shakshouka is a stovetop dish, and that ease of preparation contributed to its popularity. It’s also a very fun word to say (shahk-SHOO-kah). This recipe is a very straightforward version, but shakshouka can be bedazzled with all sorts of things, from merguez (or any other sausage) to feta or Parmesan cheese. It’s easily scaled up or down depending on your crowd. But the most important question: What kind of bread will you choose to sop up every last drop of sauce?

Heat ¼ cup of the olive oil over medium in a cast iron skillet large enough to accommodate 16 poached eggs. (If you don't have a skillet that large, use two pans, dividing the ingredients evenly between them.) Add the onions, bell peppers, garlic, dried lime (if using), paprika, cumin, coriander, and salt and cook, stirring occasionally, until the vegetables have softened but not browned, about 10 minutes. Add the tomato puree and sugar and simmer until reduced by about one-third, 10 to 12 minutes. Whisk in the remaining ¼ cup oil.

Crack the eggs into the skillet, spacing them evenly in the sauce. Lower the heat, cover, and cook until the egg whites are set but the yolks remain runny, about 5 minutes. Top with serrano chiles and cilantro and serve immediately right from the pan.