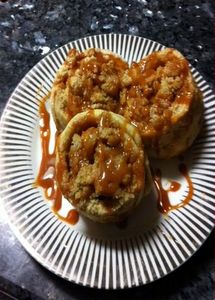 Spread a little oil  on top of dough. Refrigerate at least 2 hours until double in size.

Punch down the dough.  Divide dough in half. Roll out into a rectangle.  Spread some of the melted butter on the dough. Spread half of the filling mixture on the dough. Roll up like jelly roll. Repeat the same procedure with the remaining dough.

Slice into thick slices.  Put the remaining melted butter on cookie sheet and sprinkle some crumb topping on top.  Put sliced buns on prepared cookie sheet.  Leave space between buns as they do rise.

Brush tops of buns with melted butter.  Sprinkle crumbs on top of buns.

Bake in preheated 350 oven for 20-30 minutes until lightly brown.