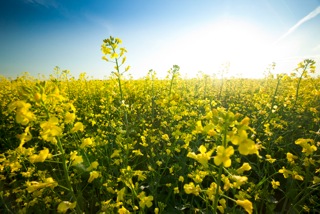 What is Canola?
A reader asked us a simple question: What is a Canola? OOPS, we did not know. KosherEye buys canola oil all the time; in fact- we often choose it instead of plain vegetable oil...but what is canola and why should we use it?

We referred to canolainfo.org for the following:

Canola oil comes from the crushed seeds of the canola plant. Canola is part of the Brassica family. Cabbages, broccoli and cauliflower are also part of this same botanical family. Each canola plant grows from 3 to 6 feet (1 m -2 m) tall and produces many yellow flowers.
As the plant matures, pods form that are similar in shape to pea pods, but about 1/5th the size. Each pod contains about twenty tiny round black or brownish-yellow seeds.   Once harvested, canola seeds are taken to a facility where they are crushed to extract the oil contained within the seed. This oil is then further refined and bottled as canola oil.
Basic characteristics of this cooking oil include a pale golden color, light texture, neutral taste and high heat tolerance. The average canola seed is 45% oil. The remainder of the seed, which is very high in protein, is processed into canola meal and used as a high quality animal feed.

Canola is grown primarily in the prairie regions of Western Canada, with some acreage being planted in Ontario and the Pacific Northwest. Smaller volumes are also grown in the North-central and South-eastern United States.

Canola oil has generated a lot of research interest into its potential health benefits because of its low level of saturated fat, high monounsaturated fat and good balance of omega 3 and 6 fats.

One additional question arises about Canola oil—does it contain toxins?

We found an answer from the Mayo Clinic
From Katherine Zeratsky, R.D., L.D.
Health concerns about canola oil are unfounded. Canola oil, which is extracted from the seeds of the canola plant, is generally recognized as safe by the Food and Drug Administration.
Misinformation about canola oil may stem from the fact that the canola plant was developed through crossbreeding with the rapeseed plant. Rapeseed oil contains very high levels of erucic acid, a compound that in large amounts can be toxic to humans. Canola oil, however, contains very low levels of erucic acid.
Canola oil is also low in saturated fat and has a high proportion of monounsaturated fat, which makes it a healthy and safe choice when it comes to cooking oils.