Pink Slime and the Kosher Market

Our readers have asked us to research whether pink slime is an issue in the kosher meat industry- so we asked two experts. Their answers follow: From Jack Silberstein, Jack’s Gourmet Pink slime is not used in any of the products produced in our facility. We at Jack’s Gourmet use only whole muscle meat in our production.

As for Kosher in general, I can say with certainty that most if not all kosher processors are NOT using pink slime in their ground beef. In general, it would be up to each meat processor and butcher as to whether they use it in their products. After making several inquiries, it does not seem as though pink slime is even available in the kosher market. You can tell your readers to rest easy on this issue.

From June Hersh, The Kosher Carnivore:
I had done a little research on it and found an article that discussed the pink slime relative to kosher. McDonald's as an example in Israel does not have pink slime as the meat is 100% kosher certified and contains no additives.  Here's what they said: 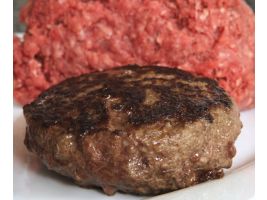 “Referring to kosher meat, and this can apply to a great extent to “halal” certified meat for Muslims as well, a certain degree of cleanliness is practiced; which most likely would not involve using meat scraps from the floors of slaughterhouses. These meat scraps are what pink slime is based on, as previously reported.” http://www.greenprophet.com/2012/03/pink-slime-mcdonalds/

Statement from OU Kosher: Kosher ground beef is made out of the kosher pieces of meat, trimmed by hand. No mechanically separated beef or pink slime is used in any OU-certified production.

KosherEye will continue to pursue news on pink slime as it relates to the Kosher meat industry. We hope that it is a non–issue.