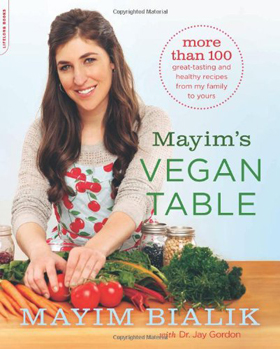 Mayim Bialik is currently starring on the CBS hit comedy "The Big Bang Theory", where for six seasons she has played the Emmy nominated role of Amy Farrah Fowler. The show won the 2013 & 2014 People's Choice Award for Favorite Network TV Comedy.
Bialik was born in San Diego, California to first generation Jewish American parents, who are both documentary filmmakers and teachers. She played the young Bette Midler in "Beaches", played the quirky Blossom Russo for 5 years on the NBC television sitcom "Blossom", and also had guest roles on some of television's most beloved shows of the 1980s and 1990s. Dr. Mayim Hoya Bialik (yes it's Dr. Bialik) is quite an amazing individual. After "Blossom", she pursued and earned degrees in Neuroscience, Hebrew and Jewish Studies, and went on to the Ph.D. Program in Neuroscience, at UCLA. She writes weekly for the Jewish parenting site Kveller.com about her life as an observant Jewish actress and mother, studies through Partners in Torah, and speaks for a variety of organizations around the United States.

And this brings us to her 2nd book "Mayim's Vegan Table - More Than 100 Great-Tasting Recipes from My Family to Yours". Although not specifically a kosher cookbook, this is absolutely a kosher cookbook. Every recipe can be prepared kosher. Mayim's Vegan Table shares over 100 plant-based recipes that she prepares at home for her two boys, Yes, she is also a working mom, so she shares recipes that are quick, filling and of course delicious. To ensure balanced nutrition and meal strategies for a healthful plant based diet, Mayim has partnered with well-known Santa Monica pediatrician Dr. Jay Gordon the book's co-author.

We especially like the Asian, Mexican, Italian and Jewish inspired recipes. There are kugels, quick breads, cakes and cookies; including Mayim's most popular at home recipe- baked ziti. You will also find recipes for hot pretzel challahs (Yumm-we have tasted these on a past trip to LA), vegetarian matzoh ball soup, tsimmes and even Passover friendly dishes such as quinoa burgers, salads and, DIY parve raw nut cheese, dips and dressings. Learn what a plant-based pantry should look like, and which kitchen gadgets are essential. Yes, after reading this book, and trying the recipes, you may be tempted to go vegan!

If you can't wait to see if you've won the book in our free giveaway, buy the book for gifting or for your cookbook library: Mayim's Vegan Table

We thank  Da Capo Press  for sponsoring the Featured Cookbook for offering a copy of the cookbook to 3 lucky winners!