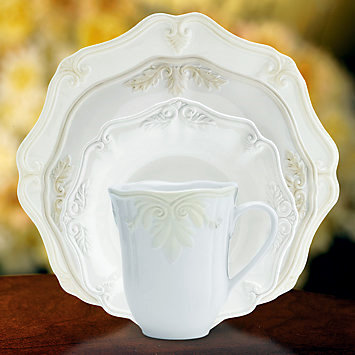 “It is my will and desire that Lenox, Incorporated shall at all times manufacture the highest possible grades of porcelain, that the standard of excellence already attained shall ever be advanced..." Walter Scott Lenox.

Since 1889, the vision of Walter Scott Lenox has guided the company he founded to set the highest standards for quality, artistry, and beauty.

In the  early 20th century, fine home dining became popular, as did the concept of a separate dining room. Walter Lenox recognized this American trend and began creating custom–designed and elaborately decorated plates, despite the domination of European china.

The first two of these patterns, Mandarin and Ming, both introduced in 1917, remained popular for 50 years. The name Lenox grew to be synonymous with elegant tableware and in 1918, it was selected for the White House, by President and Mrs. Woodrow Wilson; an official state service of 1,700 pieces was commissioned. Lenox was the first American china to grace a president's table. It still is the the only American porcelain in continuous use at the White House. New services have been created for four subsequent presidents: Truman (1951), Reagan (1981), Clinton (2000) and George W. Bush (2008).

Walter Scott Lenox died in 1920, having realized his dream and founded a company dedicated to the "perfection of American porcelain”.

Millions of brides in America have registered, requested and been delighted by Lenox china patterns in the past 80 years.  Many of the pattern names are legendary including Lowell ((a Kosher Eye personal choice) and Autumn. In 1989 Lenox celebrated its centennial and built its landmark Kinston, North Carolina plant – the only fine bone china factory in the United States. The 218,000-square-foot plant is situated on 40 acres, and can produce 15,000 to 20,000 pieces of china daily.

Lenox continues to be a lasting jewel on the kosher holiday and Shabbos table. As is well known, observant Jews have multiple sets of tableware; two sets for everyday (one for  dairy, one for meat), and then again, two for Passover. Beautiful Shabbos and Yom Tov table settings, which enhance the serving of delicious family recipes, are a memorable part of Jewish tradition. Lenox china has been part of the American Jewish table, and ours, for many years.  We cherish our Lenox Lowell pattern, given to us as wedding gifts over a quarter century ago.

And now, with the Lenox entry into the casual china category, Lenox is more and more part of the everyday table. In fact, two years ago we purchased a set of Lenox Butterfly Meadow, one of the new casual patterns. We find it lovely, colorful and practical. It is microwave/ oven-to-table ready and dishwasher safe. We use it for everyday meat meals, and because it is so beautiful, we sometimes use it for Shabbos!  We’ve added a matching table cover, serving pieces and placemats. Now it’s time to buy a new dairy set—and because of this experience, we’re sure that it will be Lenox!

For more information about Lenox China, their most popular formal and casual china patterns, please read A Chat with Glenda Elie, Lenox Corporation.

To view or purchase Lenox tableware and gift items, visit Lenox.com. Lenox china is available online and at all major department and giftware stores.