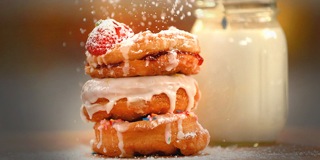 The Cronut is a hybrid -- a cross between a croissant and a donut. It is a creation of Chef Dominique Ansel for Dominique- Ansel Bakery in New York City. The Cronut became a culinary craze in 2013 when lines formed outside the bakery for a taste of this irresistible sweet treat. Now home bakers around the country are busily creating cronuts in their kitchens.
Try this copycat kosher "Cronut" recipe adapted from the original. The ingredient list is long, but it is really quick to put together. Choose your flavors. Have the ingredients ready and just do it! Assort the toppings, or select your favorite. Do let us know if you make these and which topping you enjoy.

To fry dough: In a heavy 2-quart saucepan, pour enough oil to fill it at least 2 inches deep. Heat over medium heat until oil reaches 350ºF.

Open dough canisters, and divide dough into sets of 2 triangles. Press perforations together on each pair to seal and form a rectangle. Stack 2 rectangles on top of one another, press them together, and then fold widthwise. Press down. Repeat with remaining dough.

Fry round shaped dough in hot oil for 45 to 90 seconds on each side or until golden brown and cooked through. Drain on paper towels, and allow to cool before glazing.

Direction for Cronut Drizzles:
Vanilla Glaze Drizzle: In a medium bowl, combine 4 cups powdered sugar and 1 teaspoon of vanilla; add milk, 1 tablespoon at a time, until a smooth, glaze-like consistency forms.
or
Lemon Glaze Drizzle: In a small bowl, mix 2 cups powdered sugar, lemon juice, and half of the lemon zest together until a smooth, glaze-like consistency forms. Reserve the remaining lemon zest for garnish.

Directions for Toppings/Garnish
Cinnamon Sugar: In a small bowl, combine granulated sugar and cinnamon or sprinkles or nuts – Be creative!

To Assemble Cronuts:
Split a fried and cooled croissant-doughnut in half. Spoon 2 tablespoons of vanilla pudding in center. Put halves back together; Drizzle glaze of your choice over the top. Then roll in cinnamon sugar (optional) or any garnish or topping you like. Serve immediately or as soon as possible!