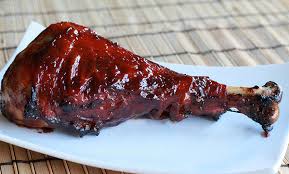 From the NY Times, December 2013:
"Disney's latest megahit is a turkey leg. It made its humble debut at a single stand in the late 1980s next to Big Al's Coonskin Caps in Frontierland. Slowly it spread —beyond Walt Disney World to Disneyland in California. . ." In 2013, the North American Disney theme parks have sold an astounding two million jumbo (1.5lb.) turkey legs — piping hot drumsticks the size of 'Fred Flintstone's forearm'. "

This is a simple recipe – but requires "mise en place"- Gather all of your ingredients; prepare the recipe. . . and then gobble, gobble!

Combine spice rub ingredients in a bowl. Mix well with a fork or if available, use a mortar and pestle. Rub onto turkey legs, and allow to marinate for an hour or two.

*If you don't have a smoker add 3 teaspoons of liquid smoke to the spice rub. Then roast in a 225º oven for 4-6 hours until safe cooking temperature is reached. When done, let rest, covered in foil for 20-30 minutes.

According to most food safety experts – safe cooked temperature for turkey legs is 165º.

Serves 6-8 depending on size of turkey legs