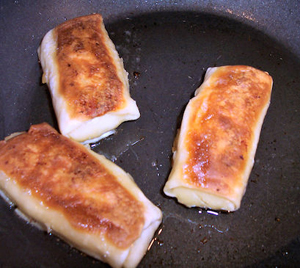 Ratner's, the famous vegetarian dairy restaurant was founded in the heart of the lower east side in 1905 by Jacob Harmatz and his brother-in-law Alex Ratner. In 1918 the thriving restaurant expanded to its better-known location at 138 Delancey Street, where it would remain until its closing.

In the research for her website The History Kitchen, popular blogger Tori Avey reports that Ratner's was the favorite restaurant of gangsters Bugsy Siegel and Meyer Lansky whose most loved menu item was cheese blintzes. Tori explains "Like many well-known personalities of the past, these mobsters saw Ratner's as more than just a restaurant. It was a place to hang out, chat, and do business, all while enjoying a dose of Jewish comfort food."
We present the famous and infamous Ratner's cheese blintzes adapted from the 1975 cookbook written by founder Jacob Harmatz's daughter, Judith Gethers and her niece, Elizabeth Lefft.  To purchase the famous cookbook, click here: The World Famous Ratner's Meatless Cookbook.

Prepare the filling first
Combine all cheese filling ingredients is a bowl, mix thoroughly and set aside

Blintzes
In a bowl combine eggs and water; blend thoroughly.
Beat in flour and salt; Mixture will be runny.
Pour 2 Tablespoons of the batter into a hot greased 8-9" omelet or crepe pan.
Rotate skillet so bottom of pan is covered evenly.
Cook for 3-4 minutes on one side or until golden.
Remove from pan and repeat process using all of the blintz batter. Pile one on top of the other, uncooked side down. At this point blintz is ready to be filled.

Place 2 heaping Tablespoons of cheese filling on one-half of the unbrowned side of the pancake. Fold pancake over once to cover the filling. Fold in sides of pancake. Continue rolling.
Heat butter in a skillet until hot. Place blintzes, seam side down, in skillet, and sauté until well golden on all sides. Serve hot, with a side of sour cream, applesauce, or your favorite blintz toppings.