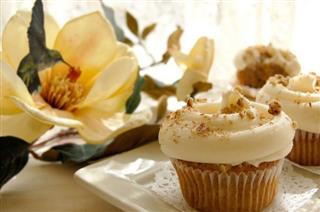 Copycat kosher gourmet cupcakes from the famous Magnolia Bakery - The recipe was provided to Epicurious.com. It is scrumptious in the original dairy version, but we have adapted it for the parve baker as well.*

Cupcakes
Preheat oven to 350 degrees F and line two 12-cup muffin tins with cupcake papers. In a small bowl, combine the flours. Set aside.
In a large bowl, on medium speed of an electric mixer, cream the butter until smooth. Add the sugar gradually and beat until fluffy, about 3 minutes. Add the eggs, one at a time, beating well after each addition. Add the dry ingredients in three parts, alternating with the milk and vanilla. With each addition, beat until the ingredients are incorporated but do not overbeat.
Using a rubber spatula, scrape down the batter in the bowl to make sure the ingredients are well blended. Carefully spoon the batter into the cupcake liners, filling them about three-quarters full.
Bake for 20 to 25 minutes, until a cake tester inserted into the center of the cupcake comes out clean. Cool the cupcakes for 15 minutes. Remove from tins and cool completely on a wire rack before icing.

Vanilla Buttercream Icing
in large bowl, cream butter with electric mixer. Add vanilla. Gradually add sugar, one cup at a time, beating well on slow speed. Scrape sides and bottom of bowl often. When all sugar has been mixed in, icing will appear dry. Add milk and beat at medium speed until light and fluffy. Keep bowl covered with a damp cloth until ready to use.

*Substitutions for the parve baker:
Use parve butter substitute such as Earth Balance
Use vanilla soy or coconut milk instead of dairy milk