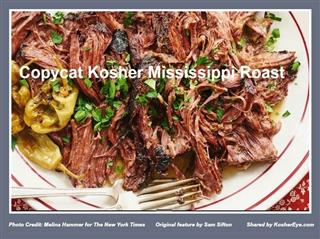 This legendary recipe is from Sam Sifton's feature in the NY Times. It is an Internet "darling"- popular among bloggers and the Pinterest crowd. We have adapted it for the kosher cook.   "Fifteen or so years ago, by her recollection, a woman named Robin Chapman made a pot roast in her slow cooker. Now known as Mississippi Roast, it would eventually become one of the most popular recipes on the web, an unlikely star with unlikely ingredients, a favorite of the mom-blog set. Ms. Chapman lives in Ripley, Miss., but she did not call her pot roast Mississippi Roast, not then and not now. She just calls it “roast.”

Place roast on a cutting board and rub the salt and pepper all over it. Sprinkle the flour all over the seasoned meat and massage it into meat.
Heat the oil in a large sauté pan set over high heat until it is shimmering and about to smoke. Place the roast in the pan and brown on all sides, 4 to 5 minutes a side, to create a crust. Remove roast from pan and place it in the bowl of a slow cooker. Add the parve butter substitue and the pepperoncini to the meat. Put the lid on the slow cooker, and set the machine to low.
As the roast heats, make a ranch dressing. Combine the mayonnaise, vinegar, dill and paprika in a small bowl and whisk to emulsify. Remove the lid from the slow cooker and add the dressing. Replace the top and allow to continue cooking, undisturbed, for 6 to 8 hours, or until you can shred the meat easily using 2 forks. Mix the meat with the gravy surrounding it. Garnish with parsley, and serve with egg noodles or roast potatoes, or pile on sandwich rolls, however you like.