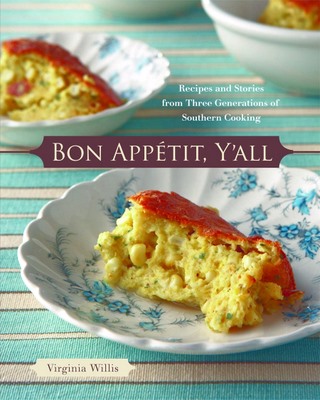 Virginia Willis believes that today’s southern cuisine is multi–dimensional. It is built on the foundation of the cooking of those “little ladies in southern small country towns”, one of which is her beloved grandmother, Meme. Chefs and cookbook writers are inspired by this foundation, not to improve the recipes but to change them to meet the needs of modern eating. The recipes are often “tweaked” a bit, perhaps to make them healthier, more upscale, or in our case, kosher. Her amazing book, Bon Appetit, Y'all

, embraces her southern culinary heritage. She blends foods and recipes experienced in her mother and grandmother’s kitchen, with her training in French culinary techniques.

Virginia modestly describes herself as” just a country girl”  but we see her as an international culinary star, inspired by her “born and bred in the south” background. Her books pay homage to the local, seasonal heirloom cuisine of her upbringing. She grew up in Louisiana learning to eat whatever her mother (and grandmother) “fixed”, including traditional red beans and rice, gumbo etc.

This self proclaimed “country girl” has quite a resume! She apprenticed and assisted TV chef/cookbook author Nathalie Dupree, who “took her out of her mother’s kitchen.” After this experience, she attended culinary school in France, graduating from the prestigious L'Academie de Cuisine and Ecole de Cuisine LaVarenne and worked as an editorial assistant with French cooking expert, Anne Willan. Later, she worked with the now famous celebrity chef Bobby Flay. She continued her career with Martha Stewart Living, where she supervised the food segments for the Emmy–award winning television show.  Condé Naste offered her the opportunity to travel through Italy as Executive Producer for Epicurious, a Discovery channel series, and she accepted. She is a nationally recognized culinary professional, a past president of the Atlanta chapter of Les Dames d’Escoffier, has appeared on multiple television shows, and has been featured in national publications.

And then came 9/11 and everything changed; she decided to return to her roots in the south and to make Atlanta her home.

Virginia spent the next few years writing, teaching and producing a TV  food show for Turner South and pursuing the idea of authoring her own cookbook. Her affinity for the history of food and culture (she holds a history degree from the University of Georgia) is the inspiration for Bon Appétit Y’all, a snapshot of three generations. Her writings combine family stories, heirloom recipes, local foods and proper culinary technique − letting the flavor of the ingredients shine through. According to Virginia, the most important thing about cooking and recipes, is that they encourage and allow people to come together in the kitchen and at the table.

Bon Appetit, Y'all: Recipes and Stories from Three Generations of Southern Cooking

, (Ten Speed Press) by talented writer, chef, food stylist, television producer and cooking teacher, Virginia Willis will delight and excite anyone interested in learning more about southern cooking. The 200 recipes revere the author’s southern heritage, and are lovingly translated through her French classic culinary techniques. The book is beautifully illustrated; along with recipes, it offers family tales and southern lore. Learn how to prepare authentic homemade dishes such as Southern Fried Chicken, Hushpuppies, “Funeral” Grits, Biscuits and Pecan Pie.  Although some of the recipes may be challenging to convert to kosher…“Y’all” buy it anyway! KosherEye and the author will help!