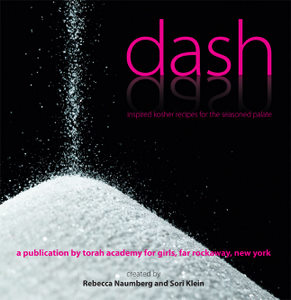 It is very evident that this cookbook was a labor of love. Created by Rebecca Naumberg and Sori Klein for the Torah Academy for Girls, Far Rockaway, New York, Dash is not the typical school published fund-raising cookbook of the past. Beautifully done, the cookbook features a selection of unique and gourmet recipes – perfect for Shabbos and Yom Tov tables.

Rebecca and Sori were the co–presidents of the TAG Women's League. Looking for ways to raise money for the school, the idea for the cookbook was born. They worked on the project for 2 1/2 years. Each brought a specific skill set to the table. Naumberg, a lawyer, handled the food/recipe part and Klein, an interior decorator, was responsible for the art. Unlike most other school fund–raising cookbooks, the recipes in Dash are not contributed by the parents. Most of the recipes are from Rebecca's private collection, some from friends, popular restaurants and chefs. " I have been collecting and creating recipes for 15 years. I am an attorney, but cooking is my passion. I was so happy to dedicate the fruits of my labor to a wonderful institution like TAG", said Rebecca.

All of the recipes featured were prepared and tested by volunteers. The food for the professional photo shoots was donated by Gourmet Glatt, Cedarhurst, New York, and after the photography sessions, the cooked food was donated to a local food (bank) gemach.

We were interested in how the committee selected Dash as the title:
"The title of our cookbook feels appropriate in a number of ways: it brings to mind the mad Dash through life that we all seem to be speeding through...We have included many quick and easy recipes for busy mothers, yielding elegant results that may appear to be time consuming but are really ready in a flash – or a DASH!"

Dash contains 159 recipes, each accompanied by a beautiful full–page color photograph. Many of the recipes contain a "Simplify" feature for those occasions when you don't have the time to devote to the full recipe. There are also plating tips and serving suggestions to help in menu planning and table decoration. The cookbook reflects the time and effort that both Rebecca, Sori, and the volunteer committee spent on producing it.

Dash is published as a not-for-profit enterprise. All proceeds go to the Torah Academy for Girls, which is in the process of a major building project. The TAG Women's League would like their cookbook to be a major part of the fund–raising for the building. KosherEye supports Jewish education and is pleased to feature this labor of love by the TAG Women's League.

Dash can be purchased through the school via email, cookbook@tagschools.org or phone at 718 471–8444.

About Torah Academy for Girls
Torah Academy for Girls is a Bais Yaakov elementary school for girls, grades nursery– 8th, plus there is a TAG high school.  The school is located in Far Rockaway, New York. It is the first all girls school in the Five Towns area.  Opened in 1964 with 70 students, it has grown to a school of 1500 students. They strive to incorporate a love for learning Torah and keeping Mitzvos while instilling Midos and Derech Eretz and creating Bnos Yisroel.  TAG secular education is very competitive and challenging.  The school is currently in the middle of an expansion project to accommodate all of the families who have been turning to TAG to educate their girls and hope the proceeds of the cookbook go a long way in assisting this project.