Recipes Remembered: A Celebration of Survival 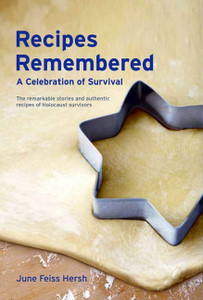 It is not often that we read a cookbook, with tears in our eyes, or actually streaming down our cheeks, or that evokes an unexpected smile. But that is how this cookbook affected us. It is a collection of cherished heirloom recipes which reflect our Jewish heritage – journeying through the kosher kitchens of Poland, Austria, Germany, Belgium, France Hungary, Czechoslovakia, Romania, Russia, the Ukraine, and Greece. Even more so however, the recipes mirror the lives of survivors and the families that lived to share them. The stories are poignant, horrific, heartwarming recollections of life in Europe before, during, and after the Holocaust.

We suggest that Recipes Remembered is just as much a memorial to a time gone by, as it is a heritage cookbook. It is a storybook filled with delicious, meaningful recipes – some taken directly from stained index cards, from memory, and some lost but interpreted by 24 contemporary chefs. Your entire purchase of the book helps to safeguard this precious culinary history, share the legacy, and to benefit the Museum of Jewish Heritage.

Susie Fishbein’s eloquent book jacket quote says it all:
“June Hersh offers us a rare gift in this cookbook.  It is a testament to the Jewish human condition and its ability to transcend the past and move forward without forgetting. The survivor's stories of deep love and great loss moved me.  The understanding that for many, these recipes are all that remains of large, close, precious families takes my breath away. The juxtaposition of their brave stories with recipes only makes what they endured even more unimaginable.  May the food of their memories nourish our spirits.

With June’s permission, we have included 2 excerpts (story and recipe) from Recipes Remembered.

Mike and Frania Faywlowicz, Poland
As told by their daughter Toby Schafer (Sadly Frania passed away prior to the book’s publication):

"Both my parents were from the same town of Piotrkó Trybunalski, Poland. My father was the youngest of ten children and two years older than my mother. My father worked as an apprentice tailor for my mother's father. When the Germans forced them into the ghetto, my father, who worked outside the ghetto as a tradesman, was able to sneak in food. He always had a soft spot for my mother, so he would sneak food to her as well. He worked in a glass factory near the train station, where he watched the train carrying his parents and siblings, fatefully pull away.

When my parents were liberated, they both went back to their hometown where they found nothing was left and anti-Semitism was prevalent. They went to the DP camp in Foehrenwald, and there they planned to be married."

Dr. Ruth Westheimer, Germany
While you know that Dr. Ruth is an expert in her field, what you might not know is that she survived a traumatic childhood and fought in the Israeli Hagganah!  In her own words, an abridged excerpt from Recipes Remembered:

"I was born in Frankfurt, Germany. In November of 1938, when I was ten years old, the SS came to take away my father. Because of that, I met the qualifications to be sent with 100 other children from Frankfurt to safety in Switzerland. In early January, 1939, my mother and grandmother put me on a train, and the last time I would see them was as they were running alongside the train waving goodbye.

We were sent to a Swiss school for Orthodox children. We German Jewish children spent hours cleaning everything from top to bottom. During the first few years, we were given a rudimentary education, but when we were old enough to go to high school, only the boys were sent. We girls continued with our cleaning and so, as a result, when I left that school it was with a Swiss diploma in housekeeping! Needless to say, it’s not a diploma that I ever hung up on my wall. I have a friend, Marga, who is a wonderful cook, especially when it comes to desserts. This is her recipe. for Celebration Cake."

Recipes Remembered: A Celebration of Survival is available on Amazon.com.